Home is Where the Tart Is

It’s been a bumpy week. The funeral, which went as well as it possibly could have. The travel, which, um, did not.

First, though, thanks to everyone for the meaningful condolences. From cannoli to cards to so, so many beautiful flowers, the expressions of sympathy have been so appreciated. There’s a certain fragility that seems to set in at times like these, an odd wobbliness, and it seems that each time someone reaches out with a kind word it gently guides me back to equilibrium. 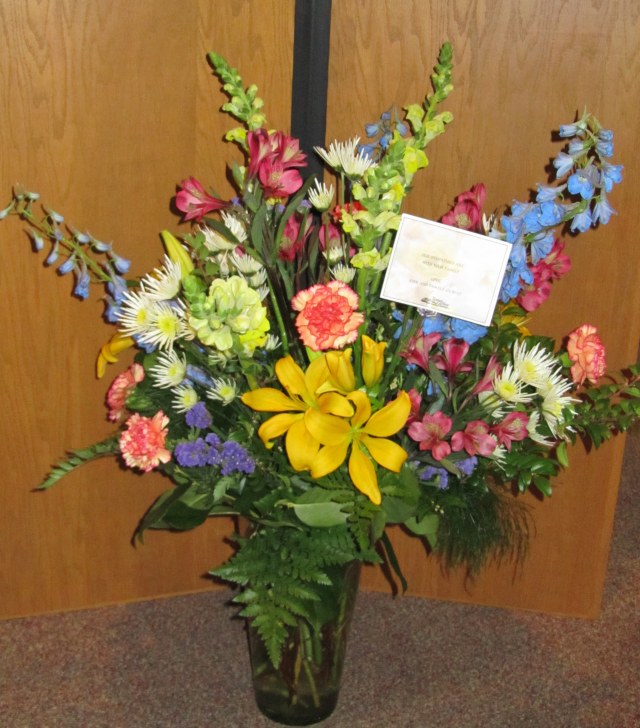 These beautiful flowers from Pollo Amiga greeted us at the church

Neither Elkhart, IN or the Roman Catholic Church get a lot of positive press, but they both have a gem in Father Bill Sullivan of St. Thomas the Apostle church. He knew my father well and spoke of him with wisdom and kindness. In his homily at the funeral mass, Father Sullivan mentioned that my father had hoped to have “one more spring”, which I also knew to be true. As spring does unfold, I will try to appreciate it all the more this year.

Father Sullivan (and my grand-niece Makenzie in the foreground)

It was a relief to have one “normal” evening in Elkhart, thanks to my friend, Nancy, who arranged her visit there to coincide with ours. The CE and I spent an evening with her and her parents, Fern and Jerry, and their criminally adorable Yorkie, Rufus.

Fern and Nancy. Resemblance much?

After the long, bleak drive to O’Hare, we had our first encounter with a full-body scanner, and, risk to national security that I am, I was sternly led off to the pat-down area. I always wonder who they allow to sail through security while the TSA ponders my nether regions. To add insult to insult, my camera was apparently stolen from my suitcase on the front end of the trip.

We were thrilled to learn that we’d been given first class upgrades on our flight home from Chicago. After an hour and a half wait at the gate, however, the thrill was definitively gone.  At the two-and-a-half hour mark, they de-boarded the airplane for another tense hour, after which we were called back on board with a load of empty promises. Another hour and a half twiddled by. Those of you who know the CE can only imagine how much eyebrow -twisting ensued. Somewhere just short of the six-hour mark, we left the gate and finally headed home.

And it is, indeed, good to be home. Dave, Karen and Victoria predictably spoiled the animals, who greeted our return with hearty yawns. 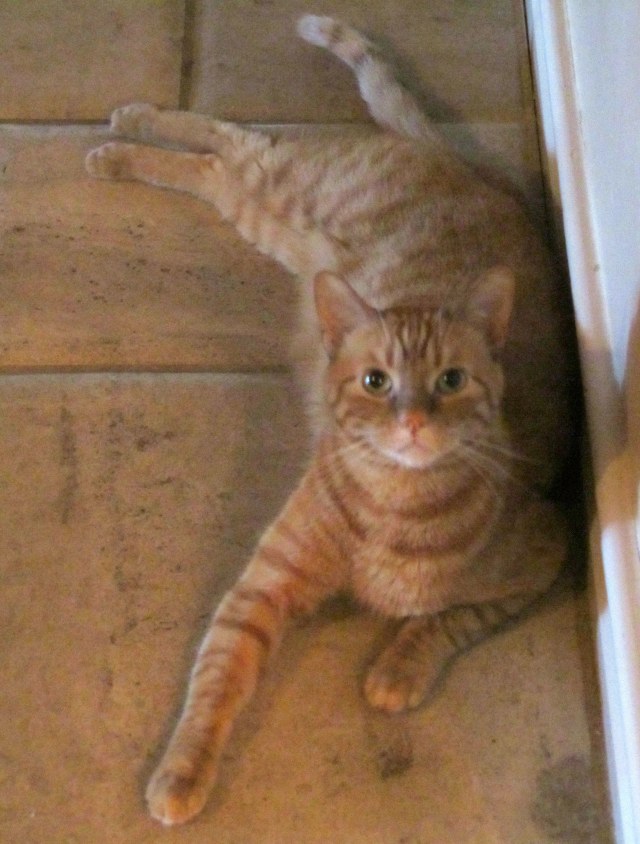 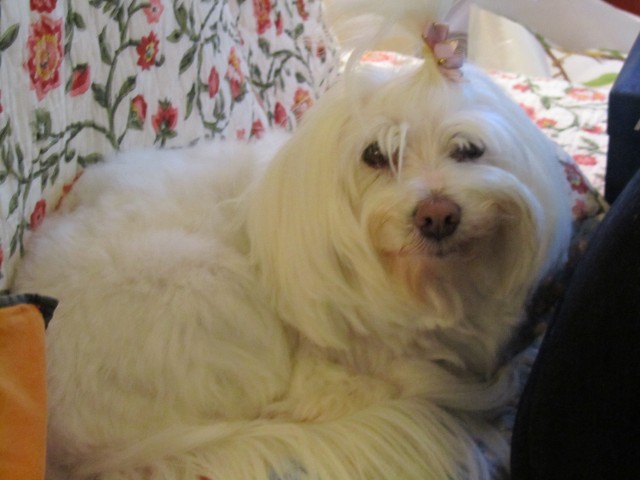 The Tart refuses to move until Uncle Dave comes back.

It may be an uphill battle to work our way back into the good graces of our pets, but we are well-armed with treats and what looks to be a sunny weekend. Hope yours is a good one!

3 Responses to Home is Where the Tart Is