You can’t walk a hundred feet in Rome without being accosted by a plate of pasta (or a selfie-stick salesman, but that’s another story). There are enotecas, trattorias and ristorantes at every turn. I think we ate at all of them.

They say you can’t get a bad meal in Rome, or all of Italy, for that matter, and it’s mostly true. As a tourist, though, it’s a bit tricky to choose when the choices are so many and varied. Travel web sites can be skewed, and our least favorite meal was the one we entrusted our hotel concierge to recommend for us.

We decided against fine dining in Rome, so tony Mirabelle and La Terrasse with their dreamy rooftop terraces will have to wait for our next trip. We had all we could handle right there in the streets of Rome, and we found some of our favorite meals when we were more or less lost in those streets. 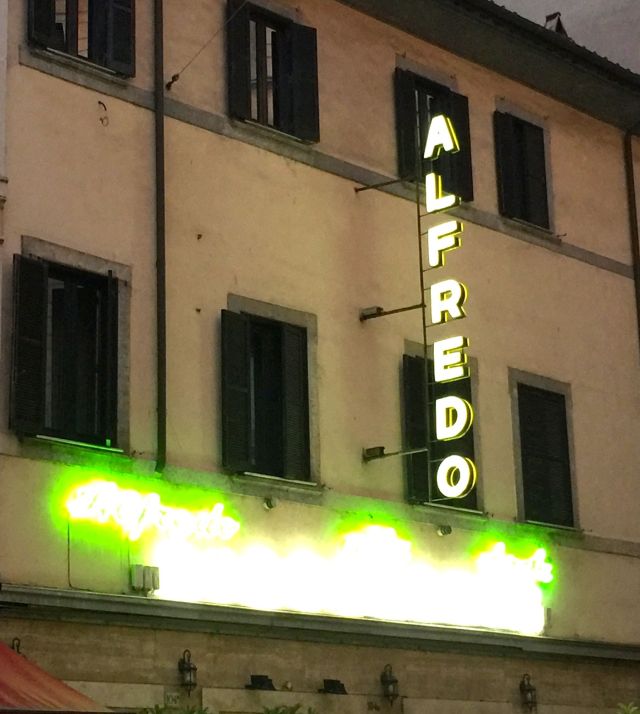 A little off the beaten path but you can’t miss it once you see the sign.

One of our first dinners was based on a recommendation from a neighbor who is known to be quite a foodie, so I was a bit surprised when he suggested Alfredo Alla Scrofa. When I looked it up, it sounded like a mecca for wayward tourists and it is true that when we arrived, the room where we were seated was full of other North Americans.

To be honest, neither the CE nor I are fans of Fettucine Alfredo, so we were a bit hesitant about eating at the restaurant that claims to have been the birthplace of that dish. Not to worry. The delicacy we were served here bore no resemblance to anything you will find elsewhere. It was absolute perfection.

We have found that salads tend to be an afterthought in Italy, but the one we shared at Alfredo Alla Scrofa was excellent.

The CE ate every bite.

For dessert, our waiter insisted that I try the Cassata, a Sicilian cake whose origins date back to the fourteenth century. It was, without question, my favorite dessert of the trip. Calories be damned! 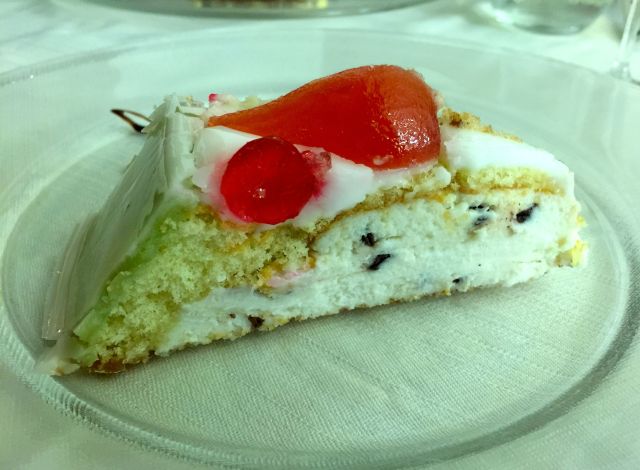 During our early evening strolls through the city, I noticed that outdoor cafe patrons were almost uniformly sipping from glasses filled with an orange-hued aperitif. Well, when in Rome, as they say, so I learned to order an Aperol Spritz. Italy-based food maven Katie Parla describes Aperol as “low in alcohol, pleasantly citrusy and slightly bitter”, “a light and fresh aperitif that owes its flavors and aromas to sweet and bitter oranges, rhubarb, and gentian root.” Refreshing and so pretty!

Da Francesco is a small trattoria near the Piazza Navona that came very highly recommended. Turns out we weren’t the only ones to hear about it because even though we had a reservation, we had to wait half an hour to be seated. It was a warm evening and the restaurant’s famed pizza oven made the small room uncomfortably warm. Fortunately, there are a few tables outside and we chatted there with a lovely young couple from Hamburg, Germany, who were seated next to us. The pizza was terrific, but the CE was not impressed with the pasta. Three days in Rome and we were already picky! 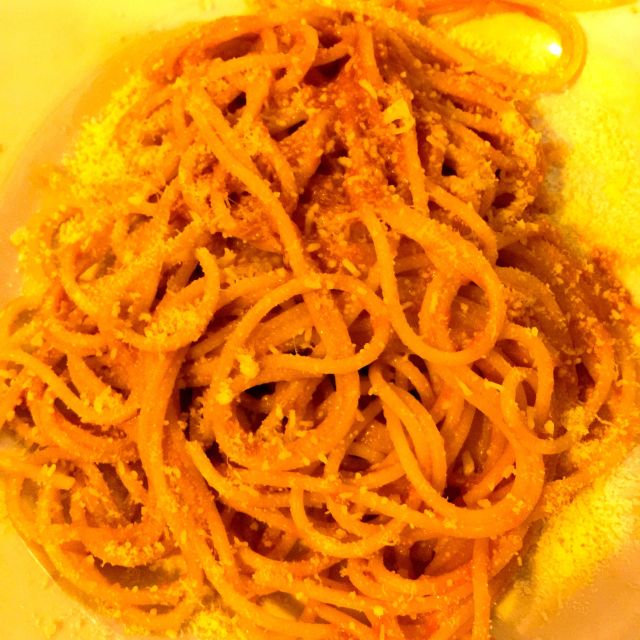 I ordered a simple pasta at Da Francesco.

We discovered one of our favorite meals at a restaurant tucked away in a garden setting not far from the Spanish Steps. I had the best cannelloni I have ever tasted at Ristorante alla Rampa. It was also here that I learned you really aren’t allowed to have lunch in Rome without a glass of the regional Frascati wine. So many expectations! Just be prepared for a nap after lunch. 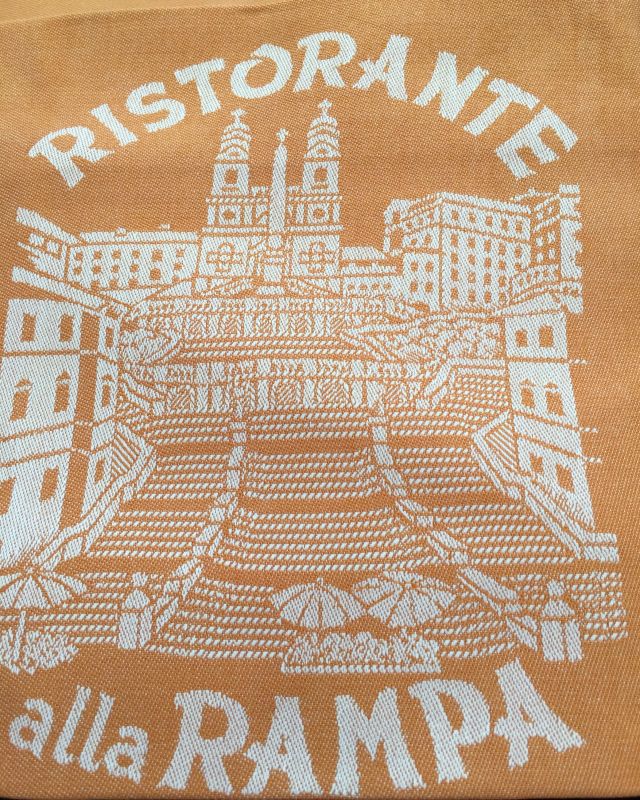 You won’t forget the name – it’s imprinted on the napkins. 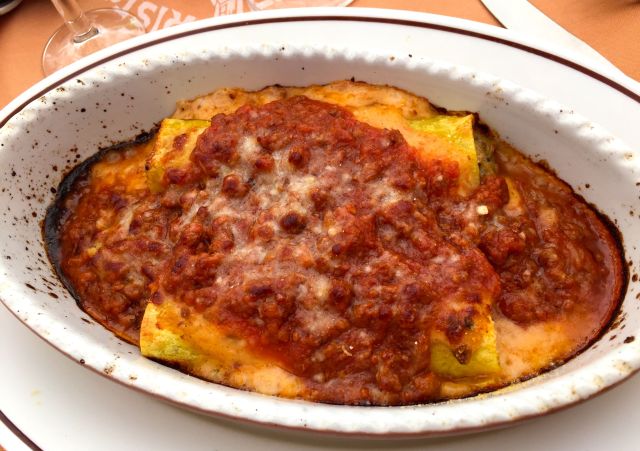 I think my favorite meal in Rome might have been at Armando al Pantheon. As you might expect, this small ristorante is just steps from the Pantheon. Popular food writer Elizabeth Minchilli describes it as “about as old school as you can get in Rome”. At least ten disappointed would-be diners were turned away while we were there; reservations are a must.

We have watched other (and much thinner) people order from every course on menus. I have no idea how they do it. I did manage an antipasti course of a tender little artichoke at Armando Al Pantheon. It was fabulous.

Everything tastes better in Italy, including the artichokes.

My main course was chicken with sweet peppers and it was unforgettable.

Yes, we had dessert that night. How could we resist semifreddo with crunchy almond cookies tucked inside?

I know, you’re screaming “Enough! Enough!” But I must share one more. After an arduous morning at the Capitoline museums (stairs, stairs and more stairs) we wandered around looking for a place to have lunch and stumbled into the Piazza Margana where we found the cheery Taverna degli Amici. Luscious fried zucchini flowers were followed by minestrone soup and then, yes, dessert. I don’t know what we ordered, but it appeared to be a tidy little stack of pastry pillows filled with some ambrosial sort of cream. Ridiculously good.

Hey, at least we shared it rather than ordering two.

La Taverna degli Amici is located in the Piazza Margana.

We ate very, very well in Roma. Is it any wonder we are convinced we could live there?

I also learned a thing or two about limoncello in Rome. It tastes completely different here in its country of origin! Salute!

3 Responses to Dining in Rome: Antipasti…Primi…Secondi…Nap!