Posted on December 1, 2018 by polloplayer

We aren’t exactly well traveled, but we travel well together. The CE and I have a travel rhythm that works for us. I am the scout, researching and planning. He is the explorer, bravely heading out into new territory to fetch me a cup of coffee when we wake up in a new city. We walk at the same pace, have mostly the same travel interests (cathedrals! historic monuments! weird, esoteric side trips that would interest no one else!) and we enjoy one another’s company.

Well, except for when we’re navigating. Too bad Google Maps doesn’t come with an ad hoc marriage counselor, because with us, simple discussions about turning left or right can escalate rapidly. This may have something to do with the fact that I have strong opinions but an ever-so-slightly whimsical sense of direction. Lest you side too quickly with Mister “I-am-a-human-compass”, however, let me remind you that he got us into a few very tight spots on those corniches on the French Riviera. But I digress…

Haha. This looks like one of those discussions. Thanks, Laura, for getting a shot of this tight-lipped “I told you we should have turned right” conversations:

But while it’s true that we often have no idea where we’re going, we do prefer going there alone, together. We have often broken our stony directionally-challenged silences with knowing smiles when we encounter that ubiquitous travel tableau: the just too perky guide holding a sign aloft while a herd of docile tourists follow obediently in her wake like a flock of ducklings.

We would never do that.

Well, except that at least they do seem to know where they’re going. 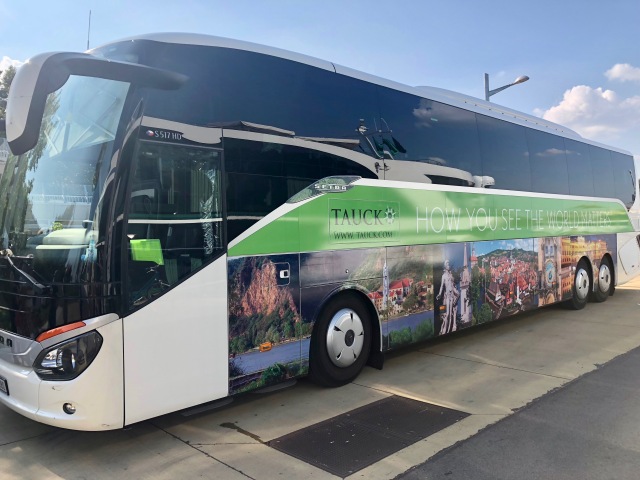 Well, yes, but there’s also a boat, and that kind of sounds like fun…

So. Back in 2016 we signed up on a waiting list for a river cruise of the Danube. No deposit, no commitment, just a mythical date on the calendar in case it came through.

But then, last May, it came through. And we had 48 hours to make a decision: fish or cut bait.

We decided to go fishing.

And that is how, a few months later, we found ourselves in a Prague hotel room, petrified of going downstairs to join our very first tour. How bad would it be if we just didn’t show up? was an actual point of conversation. I was literally having flashbacks to my first middle-school dance. (Which was a disaster, fyi.) How had we gotten ourselves into this?

“Well, they deal with the luggage; they take care of all the transfers. These are places we probably wouldn’t go to on our own” Yada yada yada.

I can temporarily masquerade as an extrovert, but soon revert to join the CE in Introvert-ville. “We’re all introverts,” chirped our youngest son cheerfully awhile back, after reading the excellent Quiet: The Power of Introverts in a World that Can’t Stop Talking by Susan Cain. So this was daunting. We were off to ride buses (buses??!!!!) to a reception and dinner with 100+ people we’d never met.

What had we gotten ourselves into?

And then, oh. Well, maybe this wasn’t going to be so bad after all: 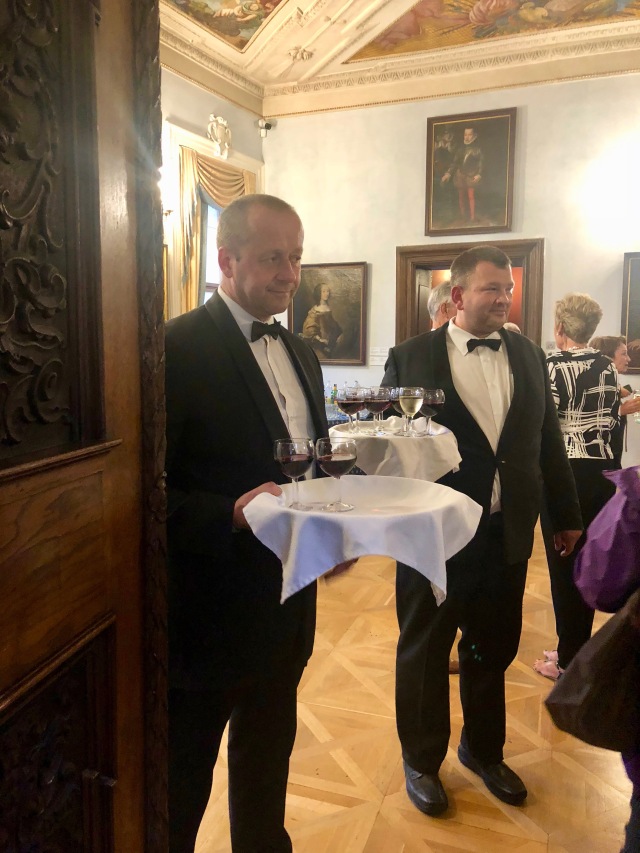 One of the reasons we chose the Tauck line was that we’d heard they were noted for their all- inclusive “special excursions” and attentiveness to gracious travel. Rattled as we were at having to talk to strangers and then spend an entire week with them, we had to admit that this looked somewhat promising. A lovely reception and dinner and a private tour of the treasures of Lobkowicz Palace. 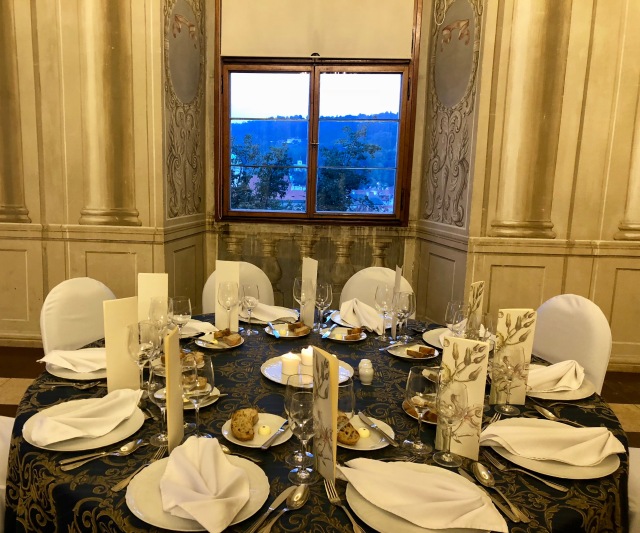 If we had to talk to strangers, at least this was a lovely place to do it!

And you know what? All those strangers seemed remarkably – like us! Tauck had provided a passenger list and from a quick scan we saw that the group hailed from all over the country – many from California, some from Florida, and a healthy sampling of the Midwest and Northeast, with some Southeast and Southwest thrown in. Mostly couples, a few family groups and a handful of solo travelers. Our age group was well represented; some were younger, some older. And everyone seemed nice! And those perky tour directors we had dreaded? They were lovely! And smart! And wow, so organized! I liked them!

The food was excellent, the wine plentiful, and the private tour was truly special. There was a scholarly lecture on the history of the palace and Lobkowicz family fortunes through the centuries. Then a tour of the extensive trove of paintings and armaments and musical instruments. We stood for a long time gazing at an original Beethoven manuscript without being jostled or disturbed.

It was such a wonderful evening. And one we never would have had on our own. Maybe, just maybe, this tour thing was going to work out after all…