What Are We Waiting For?

‘Tis the season of counting down, stressing out (jollily, of course), and waiting.

We are in the liturgical season of Advent, a time of waiting for an important arrival, and not necessarily one from amazon.com. The relationship between Advent and Christmas has become a bit dysfunctional in our time, it seems. Advent sounds archaic and – gasp – maybe even religious! And Christmas is about rushing around and shopping and decorating and parties – and ummmm,  then what?

I’ve done a lot of waiting this month. Waiting, annoyedly, for parking spaces. Impatiently, for stores to open. Waiting, excitedly, for packages to arrive, for parties to start. Waiting stoically for the sun to set a bit earlier each day. Waiting, happily, for kids to come home.  It’s a busy time. Not a lot of time to think. But luckily, inevitably, that quiet moment comes. It’s usually when I take the dogs out at night. It’s dark, and crisp, and cold.  I hear Soho and Chloe’s Christmas collars jingle in the dark. I walk over to the coop to put down the chicken door and see the hens all snuggled together on their roost.  Another day is done and Christmas is one day closer. I look up into the invariably clear winter sky (I hear there’s no more rain for us for awhile…) and see all those stars blinking back at me. 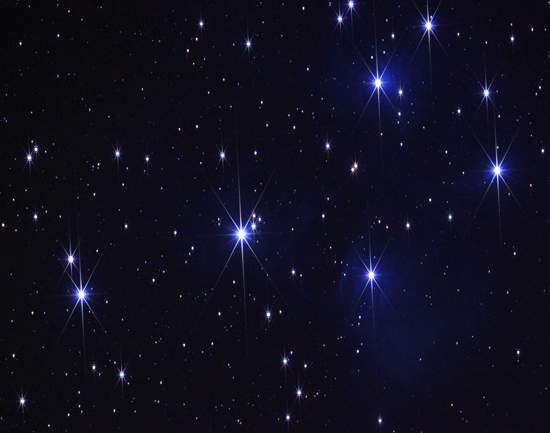 And suddenly, I am filled with wonder. With the ache of waiting for something bigger than what our 21st century holiday promises. Our shiny holidays almost seem to conspire to keep us from thinking about anything more substantive than tinsel, don’t they?

“The real meaning of Christmas is to give”

“To honor the holiday, I must honor the everyday”

“The true meaning of Christmas is to cheer people up during a cold and depressing time of year.”

These thoughts, however well intended, do not satisfy that ache for me, that sense of waiting. Sometimes I’m a little jealous of the secularists, that their world view can be so neatly tied up like a gift with a fancy ribbon. Lots of talk about science explaining everything. (As if science negates the role of a Creator – but that’s another subject) But science has never explained everything. (If it did, we wouldn’t need any more science, would we?)

This swath of the 101 Freeway never fails to captivate me (image from doctorio.us.com)

There is a stretch of the Ventura Freeway where you come around a curve and suddenly the Pacific Ocean is laid out to the right of you like a feast on a platter. No matter how many times I drive that stretch of highway, I am awed by the sight of those waves rolling in, the curve of the horizon, the dome of the sky. I think of all I’ve read about the mathematical and scientific improbabilities of our planet existing and bearing life and I picture our earth as a terrarium ornament that God holds up and views – with what? Love? Concern? Weariness?

Is this what we look like to God? (image from etsy.com)

However inconvenient it might be (we’re busy, after all!), let’s consider for a moment the possibility that the Creator of our inconsequential little planet feels some form of affection for our wayward souls (is that even thinkable?) and that He reached in to us with the most extraordinary gift imaginable – His son.

Now maybe that doesn’t impress you. It didn’t impress Jesus’ fellow Jews in his own time. They were looking for a king who would wield worldly power and instead they got one who prattled on about eternity. I don’t know about you but I get a little dizzy when I try to think about eternity. An eternity is ten minutes without my iPhone; a day without celebrity gossip, a week without hearing from my kids (Daniel, will you ever call?) But eternity, as in forever? What do we know of eternity? We live for this moment, or perhaps the next. We live on credit, on hunches, on intuition, on fumes. We are, I sometimes think, no more than moths beating their wings against a porch light while, just beyond, there is a true radiance within that eludes us. I know it’s there. I feel it. That, I think, might be faith.

We are all so certain of what we know, and so fearful, it seems, about looking deeper. I had a chat yesterday with an acquaintance who is an avowed secularist. He tolerates my Christian faith respectfully and bemusedly. When Jesus comes up in conversation, he smiles in a way that suggests he believes we are talking about a fiction, a kind of Disney character. We’ve had many friendly chats on the topic, although, predictably, neither of us has ever budged an inch from our beliefs. Yesterday, he asked me in passing what the Jews of his day thought of Jesus.  “You do know that Jesus was himself a Jew, right?”, I asked.  My acquaintance was dumbfounded. This is a well-educated man who dedicates many hours a week to his secular “church”, learning and studying and communing with fellow non-believers. And he had absolutely no idea that Jesus was a Jew. Not that his spiritual view will be swayed in any way by that new tidbit of knowledge. But it does remind me that we all only know what we know.

I know far too little, a failing I am reminded of every time I wrestle with these subjects. But I do know that I have two Christmas lists. One is for the here and now: 1) a winning lottery ticket, 2) the perfect coffee mug and 3) please, please, please a Golden Retriever puppy under the tree with a big, red bow around her neck. In a season of waiting, I realize I may be waiting forever for those gifts, although if someone (say, a potentate like a Chicken Emperor) wanted to make it happen, that puppy could be a reality, couldn’t it?

If someone loved me, this is what they would give me for Christmas (image from imgarcade.com)

The second list is one for which I also wait: wisdom, courage, a deeper faith, peace, understanding. These are the true gifts of Christmas, the ones that come, I believe, from a deeper encounter with a true potentate – a loving God who has graciously reached into our lives and offered us a new covenant with Him through his son, the Christ child whose advent we celebrate this season. Amid the tinsel and the trappings, I hope we all find some quiet moments to to be filled with wonder and ponder what we’re really waiting for.

“The incarnation, however, is the great miracle. On the other hand, the incarnation challenges the view that all depictions of reality are socially constructed to serve the purpose of the dominant group, that there is no such thing as “Truth” at all. The incarnation, however, teaches that there is an absolute Truth and it has become a human being. Finally, the incarnation challenges the modernized versions of religion which consist almost entirely of ethical behavior or which make God a very vague and generally impersonal being or mysterious life-force. But the incarnation tells us that we have a very real God—one who can be known, talked to, listened to, served, and loved. The incarnation gives us the most personal God in the face of modern efforts to de- personalize the deity”. – Timothy Keller, Redeemer Presbyterian Church, New York

9 Responses to What Are We Waiting For?