I guess we had envisioned Jimmy Buffett serving Margaritas in crystal glasses from a roadside stand under a “Welcome to Key West” banner, so our entrance to the quintessential Key in the Keys was a bit of a letdown. A1A is a veritable strip mall ring encircling the community on the approach, reminding you that you are in the most populated of the Florida Keys. There is currently a significant amount of construction on the road, so we had to thread our way through heavy traffic past the Kmart and fast food restaurants that dotted the road to find our hotel.

The sign promises Paradise but all I saw at first was the Kmart.

We checked into the Westin, chosen because of its waterfront location on Front Street. We splurged on a suite and, luckily, ours was at the far east corner of the building where our view could not be blocked by the cruise ships that dock along the waterfront.

Here is the CE on the lovely balcony of our room at the Westin.

First order of business once we’d settled in was to find the southernmost point of this southernmost city in the United States. Seemed like a good idea at the time, but it led to our least favorite evening in Key West, of which we only had two. It was only a mile walk but it felt like five as the sweat dripped off us in the late afternoon heat and humidity. No wonder they drink Margaritas in Key West – they must be positively medicinal for replacing all the salt one loses whilst one merely breathes in and out in the heat. 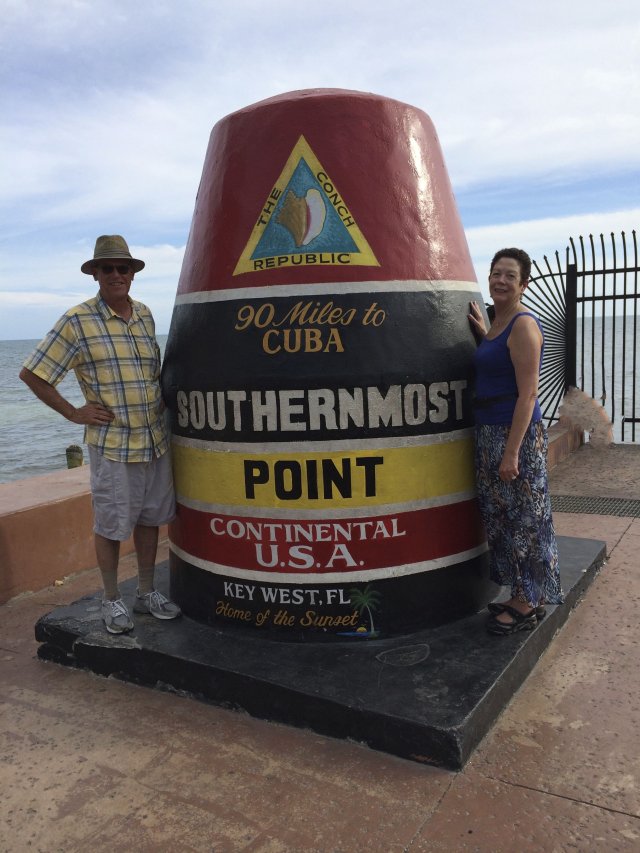 Truth be told, I had set my sights not on a Margarita but a Daiquiri. The CE and I are both unabashed Hemingway fans and we looked forward to treading where he had trod in Key West. Since he reportedly spent most of his time drinking daiquiris in the local bars, that was our next destination after bagging our photo at the Southernmost Point.

A considerable amount of squabbling goes on regarding which of the community’s watering holes were Hemingway’s favorites. Sloppy Joes is probably the best-known, so we walked back up Duval Street in search of the famed saloon. I don’t know how Hemingway would feel about Duval Street and Sloppy Joe’s today, but they just weren’t our cup of rum. Peppered with head shops, t-shirt emporiums and at least one “adult entertainment club” that looks for all the world like a brothel, Duval Street glories in its commercialised seediness. The only class establishments on the street seemed to be the gay bars where, at one, we glimpsed an elegantly clad transvestite beckoning to patrons with a flourish of her retro cigarette holder. She was the lone token of style we beheld, and alas, it went downhill from there once we stepped into Sloppy Joes.

Looking for our Hemingway fix: Sloppy Joes on Duval Street in Key West

The scene inside Sloppy Joes was more desultory than raucous. I would have preferred our vacant-eyed and mostly absent waitress to be more live and the musical “entertainment” to be less so; tasteless is far too tame a word to describe Pete & Wayne. The duo sang interminably of their scorn for Jimmy Buffett and then lapsed into a ditty that had to do with defiling moose in Maine. We weren’t channeling Hemingway. We didn’t stay long. I think Pete and Wayne were singing their “Scrotum Song” as we left…

It’s a tradition, but maybe not the best one.

Dinner that evening was pre-fab pizza at the Hard Rock Cafe, where we sat on a terrace and looked out upon other tourists streaming along Duval Street. I silently counted the tattoos I saw on passersby (37) while we discussed To Have and Have Not (superb!) and rated the limp slices of pizza in front of us (absolutely terrible!) If I had it to do over again, we would have stopped into The Green Parrot Bar for our drink (billed as “a sunny place for shady people” it still outclasses Sloppy Joes) and had dinner at Louie’s Backyard. Next time!

We actually considered checking out of our hotel and skipping our second day in Key West. Glad we didn’t, because all was redeemed the next day, as you’ll learn in the next post. As it turns out, there is a lot to love in Key West! 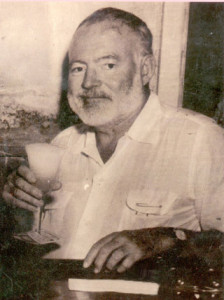 Hemingway with a daiquiri. Cheers!

2 Responses to Florida Road Trip, Part 5: Our Not Favorite Day in Key West.