Two words that should never go together: cornea and ulcer. Throw in another word: infection, and you’ve got the ingredients for a wild ride.

Every January, when the pittosporum blooms, my allergies start to rage. My eyes get red and watery and itchy. This year was worse. Maybe because we haven’t had any rain in southern California, I wondered? 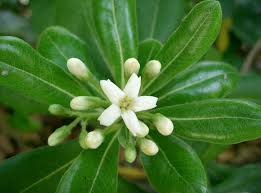 When the pittosporum blooms in January, my allergies kick up. (image from wikimedia)

My eyes were really bothering me. I was on the verge of going to the doctor a few times but never did. I am a Midwesterner; you don’t bother the doctor for “little things”.

Little things like your eyes, which allow you to see. Yes, that was Strike 1.

I wondered if I should take my contacts out for awhile, but when I did, they seemed more irritated. So I kept them in. Strike 2.

I’ve been wearing contacts for years. I have said to anyone who will listen that they are a true medical miracle: my Air Optix Night & Day contacts are approved for 30 days of continuous wear, meaning that you don’t have to take them out at night. They were prescribed by an optometrist (Strike 3) with her blessing and just a reminder to “rest my eyes” for a few days when I changed the lenses each month. 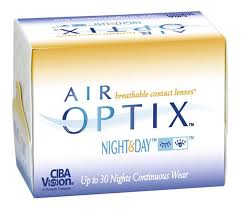 They are called “Night & Day” breathable lenses. Seemed like a great idea to me.

Three strikes and you’re out. I ended up in the ER at 2 am one night last month. The pain in my right eye was so severe that even the lowest bit of ambient light in a room felt like my eye was being seared by a branding iron.

Dr. Silverberg, the ophthalmologist on call was notified that I needed to be worked into his schedule and I waited in a darkened room of his office for two hours that morning, yelping involuntarily every time the door was opened and a crack of light shone in. I was the vampire in the closet.

Dracula’s got nothing on me. (image from movielistmania.com)

Dr. Silverberg was unamused. Maybe because the ER had awakened him in the middle of the night and, like me, he hadn’t had much sleep. But also because, as he said, he “sees this a lot.” What I had, he told me, was a corneal ulcer that had become badly infected. He kept using the word “sight-threatening”. And, in his words, it is “100% due to long-wear contacts”, which HE would NEVER, EVER prescribe for a patient of his. But I had worn them for years, I protested. “It works until it doesn’t,” he responded.

The white blob is a corneal ulcer (image from theeyepractice.com.au)

This was a Friday morning and we were due to fly to the East Coast on Monday. Could I travel? Yes, he said, if, and only if, I saw an ophthalmologist there the following day. He sent me away with instructions to administer antibiotic drops every hour on the hour. I spent the weekend in a darkened room. No light. No reading. No fun.

By Tuesday, I could almost bear the light if I wore sunglasses and since it was a blessedly dreary day, I donned my shades and walked across the Park to my appointment with Dr. Jacqueline Muller on the UES. I thought it would be a follow-up, a check in the box and I would be on my way. Not so fast. It was the first of four visits. “What you have is sight-threatening,” she said. There was that phrase again. “You are really, really lucky that it’s on the periphery of your cornea and not over the pupil”. Corneal ulcers leave scars, and a scar over the pupil is a long-term sight impediment.

In addition to contact lenses, a secondary risk factor for corneal ulcers is a condition called dry eye. Which I have, and which turns out to be a speciality of Dr. Muller’s. Dry Eye is common enough that the Wall Street Journal wrote an article about it. 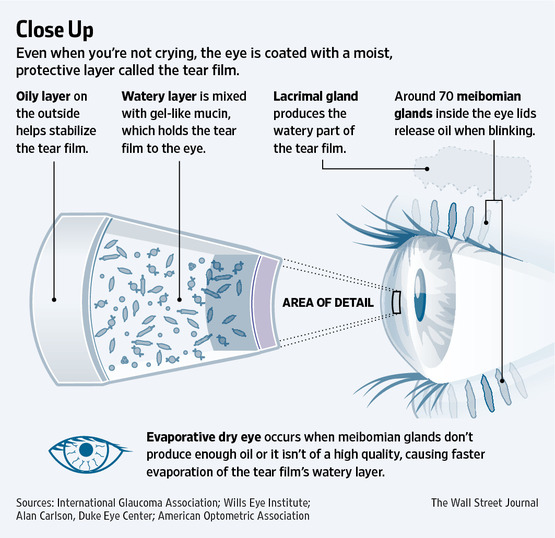 Dr. Muller sent me off with a new antibiotic regimen, steroid eye drops, a sticky salve to be administered in both eyes at bedtime and her cell phone number. Call me if anything changes, she said.

I was cautioned to only use preservative-free eyedrops. Eyedrops with preservatives can be toxic, Dr. Muller said.

By my third visit with Dr. Muller, when she said it looked like I was “out of the woods”, I worked up the courage to ask about returning to my long-wear contacts. Her response: NEVER EVER. Like Dr. Silverberg, she said she does not prescribe long-wear contacts. I will be able to wear contacts for a few hours at a time, she said, but my new life is framed by glasses. Which I hate, by the way, but the important thing is that I can see. “I don’t think you realize how lucky you are,” Dr. Muller told me at my final visit with her. “You were at risk of losing the sight in that eye.” A friend later confided to me that he knows people who have, indeed, lost their sight as a result of infections like mine.

Remember how I said that my irritated eyes actually felt better with my contacts in? In a Review of Ophthalmology article, Dr. John Sheppard says “A contact lens may actually mitigate the initial symptoms of an ulcer. As a result, the patient may leave the contact lens on to make it feel better, thereby delaying presentation to the ophthalmologist or optometrist.” Consider yourself warned.

Almost a month later, my eye is still light sensitive, but much, much better. I share this cautionary tale in the hopes that you (unlike me) see the light, so to speak. What I learned:

1) long-wear contacts are maybe not such a good idea.

2) do your eyes a favor and see an ophthalmologist instead of an optometrist.

3) if your eyes are bothering you, don’t be an idiot. See a doctor, for God’s sake.

4) how lucky I am to have the CE who took such good care of me, and for dear friends and family who checked in throughout my little ordeal.

5) never, ever, and I mean NEVER EVER take your sight for granted!

Learning to love my glasses (such a fun dinner last week with Victoria and Tymon!)

6 Responses to Sight for Sore Eye.