Feeling the “Ah” in Kiawah.

Most travelers go directly from Savannah to Charleston, but we had the luxury of time and while planning our trip I was intrigued by the Sea Islands that stretch in a golden chain from Florida up to South Carolina. Sea Island in Georgia and Kiawah Island in South Carolina turned out to be great choices for our island stops.

A map of the Sea Islands: there are more than 100! (Wikipedia image)

We made it a goal to divert from the Interstate as much as possible since this might well be our only visit to the area and we wanted to see as much of it as we could. So we took the slow route from Savannah, first making a detour to Tybee Island to visit Fort Pulaski and then a side trip for lunch in Beaufort, S.C.

Lots of history at Ft. Pulaski. Built after the War of 1812, it was bombarded by the Union Army during the Civil War . It was a great primer for our subsequent visit to Ft. Sumter. 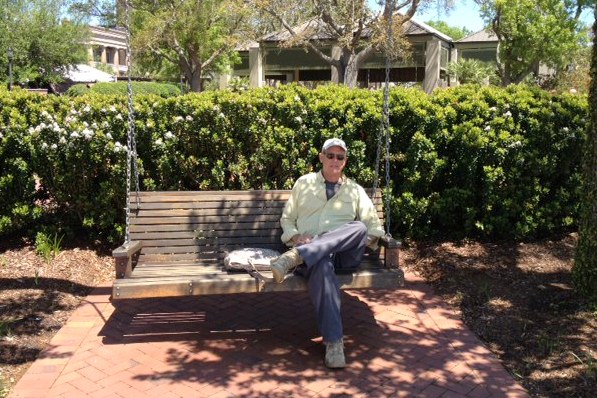 We stopped in tiny Beaufort, S.C. for lunch and a visit to the lovely waterfront there.

It was late Friday afternoon by the time we wound our way onto Johns Island and to Kiawah Island. Originally settled by Native American tribes including the Kiawah, Stono and Bohicket, the area is as rich in Colonial and Civil War history as it is in natural beauty. Developed in the 1970’s as a resort and golf community, the island is home to numerous species of wildlife. Its rivers and tidal marshes draw hundreds of species of birds as well as deer, bobcats and marine creatures.

In addition to wildlife, Kiawah Island abounds with golf courses and lodging for golfers. There are stunning plantation-style mansions on the water as well as scores of villas and condominium developments, all tucked tastefully in among the woods and waterways. We stayed at The Sanctuary, a 255-room beachfront hotel. It does not have the historic charm of The Cloister at Sea Island, but it is as close a second to that as I think you can find in the area. Our room was on the Club Floor, which reminded me so much of a Ritz-Carlton that I would be willing to bet it is under their management.

Our room at The Sanctuary. We had a partial ocean view.

The formal lounge at The Sanctuary. Some similarities to The Cloister. 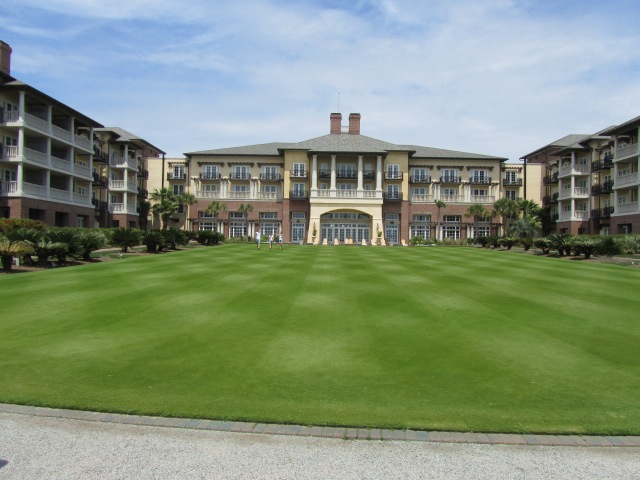 The Great Lawn at The Sanctuary

The terrace is a popular gathering place for Sanctuary guests.

After checking in and getting settled, we boarded a hotel shuttle for the fifteen-minute ride to have dinner at the resort’s Atlantic Room. Egrets dotted the marsh areas as the sun dipped toward the horizon, and I saw a white-tailed deer plunge into a thicket as our van rounded a bend. The drive was lovely and the destination even more so: The Atlantic Room and its adjacent Ryder Cup Bar (the matches were held here in 1991 and the building is brimming with memorabilia) overlook the sea and the 18th hole of the resort’s Ocean Course. 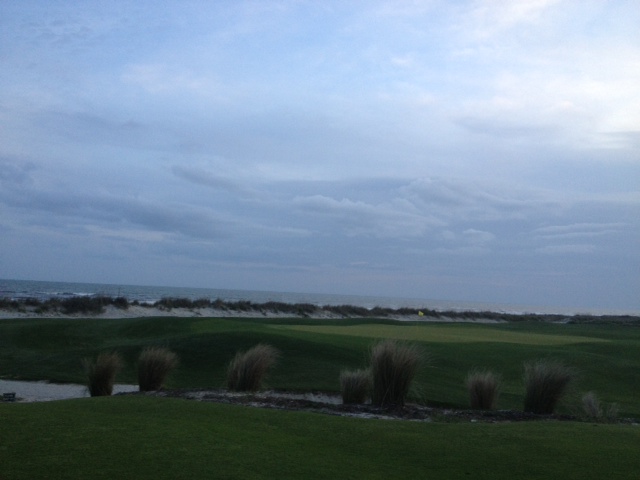 The clubhouse is a virtual shrine to the 1991 Ryder Cup and to Ocean Course designers Pete and Alice Dye.

Since we aren’t golfers, we needed to devise some other activity during our stay at The Sanctuary. The CE heard that there was a “Gator Walk” and signed us up. No sooner had we met our guide in the Sanctuary gift shop than she reached into a mysterious large box and brought out a three-foot alligator for her show-and-tell portion of the tour. 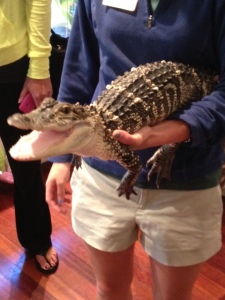 It looks like he’s smiling, doesn’t it? Probably sizing up his next victim!

After learning a bit about gators (yes, they bite if you provoke them; yes they eat small animals including pet dogs and cats; the reason there is one big gator per pond is that he eats his young and any other challengers) we set off to tour a few nearby ponds known to be alligator habitats. Once a gator sets up housekeeping, he or she will settle in for years and no one tends to argue that point. We saw one that had commandeered the side yard of a multi-million dollar home – at first we thought it was a lawn ornament until we were told it had lived there for years, growing from one to six feet as it apparently ate its way through neighborhood pets.

Probably not a good idea to go swimming here. 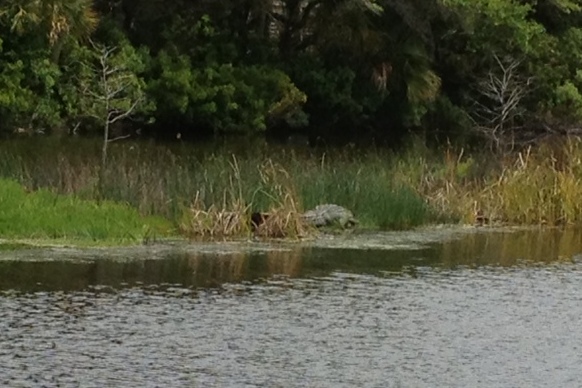 Well camouflaged, but it’s a big ‘un if you can see it.

If you stay at The Sanctuary, you have to eat dinner one evening at the hotel’s signature Ocean Room. 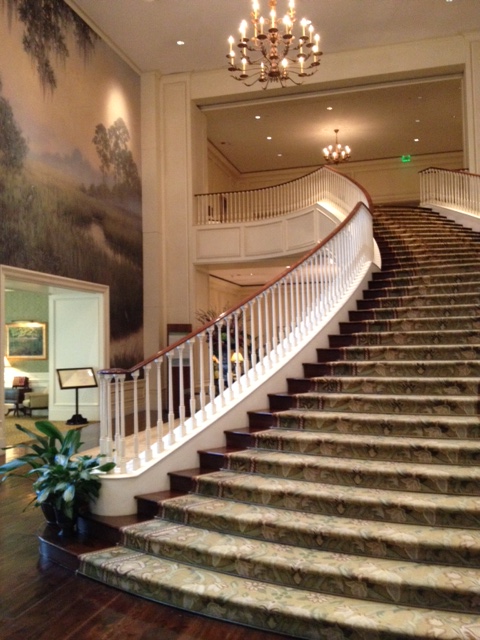 The grand staircase to The Ocean Room 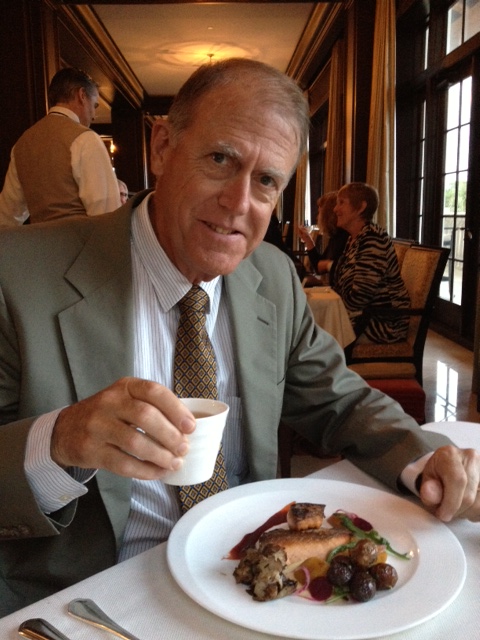 The CE cleans up well, doesn’t he?

We went off campus for Sunday service at Johns Island Presbyterian Church. Organized in 1710, the church building was erected around 1719 with additions tacked on in the nineteenth century. The pews lock from the outside: no escape if the sermon is boring!

The church interior – it doesn’t look that old, does it?

After church we had lunch at Rosebank Farms Cafe on nearby Seabrook Island. Excellent low-country cuisine and a lovely harborside setting. 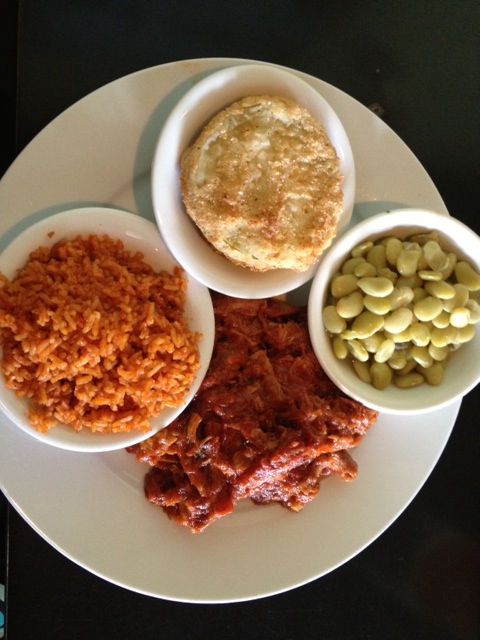 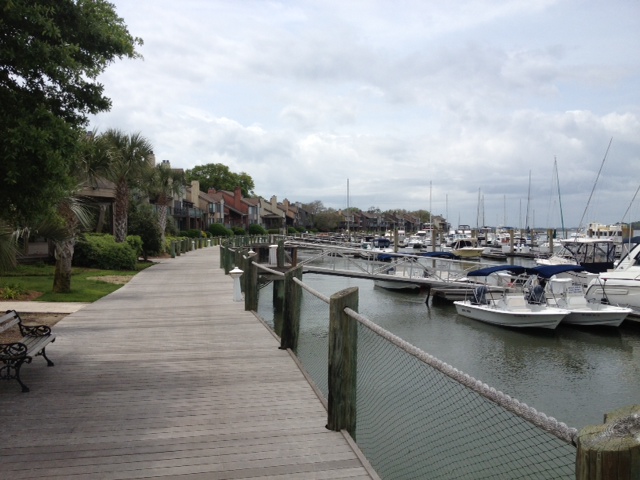 The Bohicket Marina on Seabrook Island

We enjoyed our stay at The Sanctuary. It is a perfect relaxation destination. I will remember our view of the beach and the sound of the waves when we propped open our balcony door. I will remember the windswept look of the Ocean Course at the Atlantic Room – not to be missed, even if you aren’t a golfer. And yes, I will most definitely remember the alligators – very glad to have 3,000 miles now between them and me! 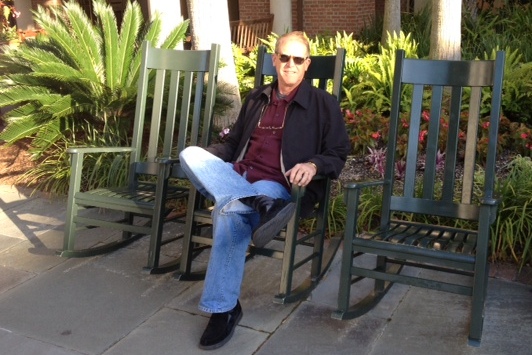 The CE rocks out at The Sanctuary

4 Responses to Feeling the “Ah” in Kiawah.