Thinking Inside and Outside the Box

Big news in NYC this past week (besides the never-ending winter) was Tilda Swinton’s shut-eye gig at MOMA. She appears, unannounced and in various locations throughout the museum, prone and apparently asleep inside a glass chamber.

Actress Swinton premiered the installation, entitled “The Maybe” in 1995 at London’s Serpentine Gallery and reprised it at the Museo Barraco in Rome. So perhaps this third time will be a charm for the sleeping beauty and David Bowie doppleganger. As far as performance art goes, I think it must be a real snooze, but I will bet it has been a boon for bringing patrons to MOMA and that’s a good thing.

Also garnering publicity is the Berlin Jewish Museum’s irreverently titled “Jew in a Box” exhibit. According to the Jewish magazine Tablet, the purpose of the exhibit is “to help educate postwar generations” and features a Jewish man or woman seated inside a glass box for two hours a day to answer visitors’ questions about Jews and Jewish life.

What would you ask him? (image from tweetbuzz.us)

Did you know that there are fewer than 200,000 Jews currently living in Germany? The museum installation is fostering controversy but I rather like the idea of a kvell answer man, so to speak. I don’t know what I would ask him, but I know what I would tell him. I would apologize to him for the hate and mistrust perpetuated by generations of misinformed and not-very-Christian Christians who have laid the death of Christ at the feet of the Jews.

The CE and I attended a Good Friday service yesterday at Calvary Baptist Church on 57th Street where Pastor David Epstein gave a rousing sermon on the subject of the Crucifixion and reminded the congregation, peppering his acclamations with frequent “Amen!’s” that it was NOT the Jews who killed Christ, and it was NOT the Romans who killed Christ; it was God’s love for his people that led Christ to voluntarily “give up his spirit” according to Matthew 27:50. If you are interested, Pastor Epstein’s full message can be downloaded here. A similar message in print by author Michael Caputo can be found here.

It’s food for thought as Easter approaches and newly annointed Pope Francis is wasting no time spreading a message of love and raising controversy. Due to a liturgical ban on the inclusion of women in Holy Week services, traditionalists were outraged at the Pope’s decision to wash the feet of female inmates at the Casal del Marmo detention center in Rome. The new Pope evidently likes to think outside the box. 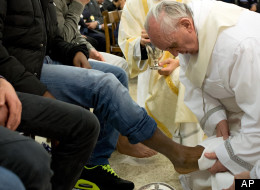 In torch-lit darkness, the Pope also participated in a ceremony at the Colosseum in Rome yesterday commemorating Christ’s last hours. His words there: “Christians must respond to evil with good, taking the cross upon themselves as Jesus did.”

The Pope’s appearances may rate as the most outrageous performance art of all. He reminds us of the most breathtakingly radical concept ever conceived: “Love thy enemy”.

3 Responses to Thinking Inside and Outside the Box