There are two kinds of people in the world: those who collect and those who do not.

The only thing I seem to collect is dust. Well, dust and infirmities. If left to my own devices, I would probably collect more living creatures (I still want a pair of pygmy goats!) but, regrettably, we seem to be slouching toward the de-acquisition stage as far as animals go.

I guess you could say I’ve begun a collection of chickens that look like bowling balls.

The CE, however, is a true EC. That is, our venerable Chicken Emperor is also an Emperor of Collecting. As a kid he collected agates and coins and who knows what else. Equations, perhaps. Early in our marriage he happened past a local antique store where a small Oriental carpet was on display outside and that chance encounter led to thirty years of drinking tea in back rooms with Middle Eastern rug experts. One of them is now his good friend Wali, an Afghan emigre who left his country during the Soviet occupation in the early 1980’s to start a new life in the United States. 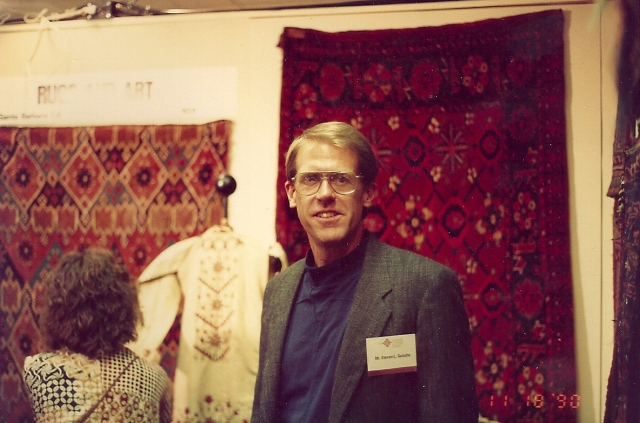 The CE back in 1990 at an oriental rug conference. 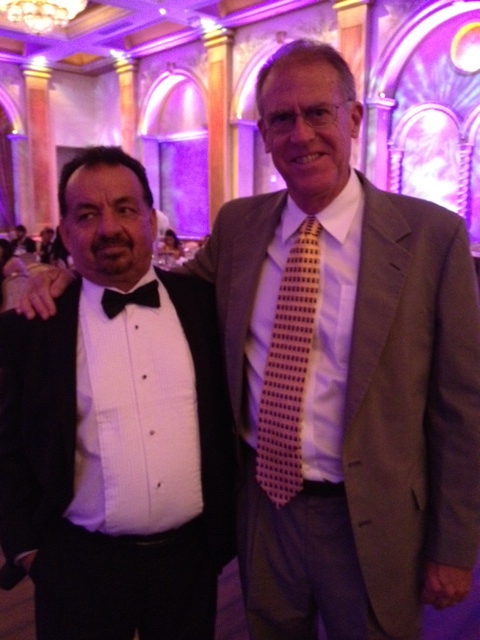 Wali and the CE at the recent wedding of Wali’s youngest son.

It recently occured to the CE what many visitors to our home have observed repeatedly over the years: we have too many rugs! And so arrives the end of an era. There will be no more Tekke Turkomans, Isfahans, bagfaces or camel bells crossing our threshold. In fact, he is currently in the process of downsizing his collection, just in case you’re looking to decorate your yurt.

Chloe poses with a Caucasian rug, most of which come from Azerbaijan

Ah, but what I have learned about the CE is that one esoteric collection simply leads to another. (JMHO, but anyone who says collecting is not an addiction should perhaps then inquire as to why the purveyors of collectibles are called “dealers”) I don’t think we’re ever going to see him collecting thimbles or frog figurines or even baseball cards. For the CE, odder is better and that is what brings us to Napoleonia, if that is by any chance a real word. As an avid student of military history, the CE has long studied Napoleon, and with him, study is a slippery slope that leads to collecting. Weird stuff. Like a statue of a Napoleonic era soldier that brings to mind a supremely hideous lawn ornament. Oh, and sabres. You might have photographs or posters hanging in your study; we have sabres.

The CE’s bliss is a decorator’s nightmare.

The good news is that, as with rugs, collecting Napoleonia also means collecting friends. In the process of learning about the sabres of the Napoleonic era, the CE was led to a learned gentleman in Atlanta who became his “sword mentor”. Al has advised the CE on matters of authenticity and has helped him build his small collection and, in the process, has become a friend. He visited us a few months ago and the two of them pored over things Napoleonic for hours. Later this year we will visit Al in Atlanta and I imagine he and the CE will have another sabre session there. 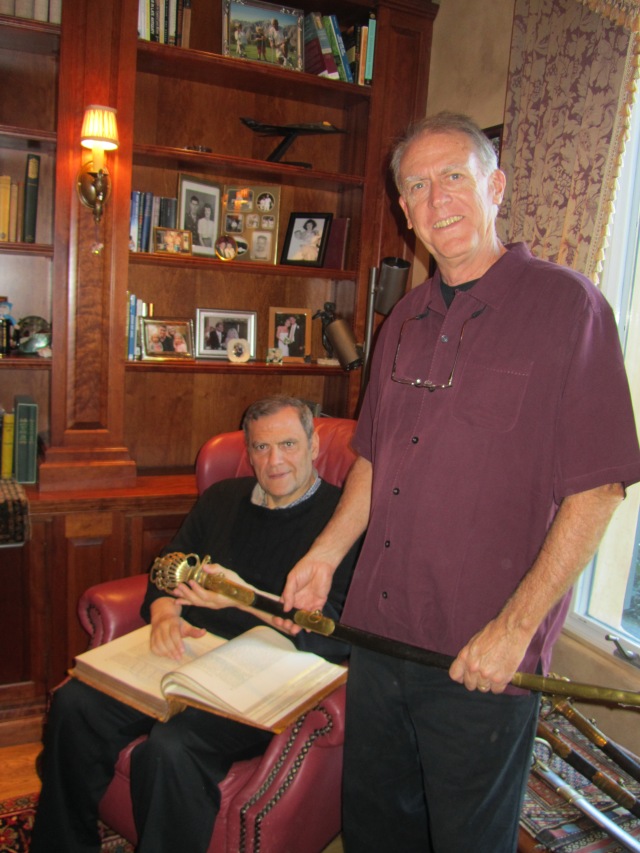 Swordplay: Al and the CE

The dogs were convinced Al came to visit them, so he was forced to take them for a walk.

The CE, not yet being quite full-tilt mad, eventually realized that there was only so much wall space that could be dedicated to swords. He did not, however, see this as a reason to cease collecting. Not in the least. Because for my dear husband, when one wall is covered, a bookshelf opens up. And so began his collection of 20th century American literature. Books. Yes, books. You know, those things they say people don’t read anymore?

We both share a weakness for Willa: here are some Cather firsts

As I have mentioned here before, it started with our shared affection for Willa Cather, then branched out into Edith Wharton and then, there you have it, a new collection. And one of the most fun things about collecting books is meeting the book dealers. Among those who have become friends are Joshua Mann and Sunday Steinkirchner, newlyweds and co-owners of B&B Rare Books in New York City. They spent a night with us during their sojourn between West Coast book fairs a few weeks ago and we had so much fun hosting the Manhattanites for their first visit to Santa Barbara.

First order of business was chicken introductions: here is Sunday with a reluctant Lucy 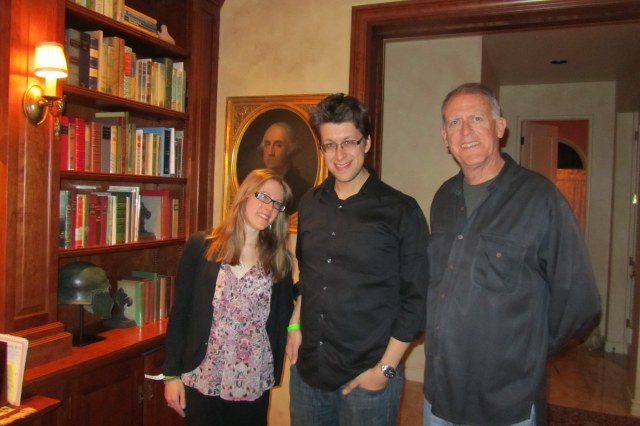 And then the CE gave them the tour of his library

And before they left for San Francisco, we had breakfast at the beach

Later this month, Josh and Sunday will be opening their new Gramercy/Flatiron gallery at 30 East 20th Street. If you’re going to be in the city, you’ll want to make an appointment to visit, if not to see their books then at least to visit with their powerfully cute Shih Tsu, Marlowe, who we are told will be ambassador-in-residence at the new gallery. 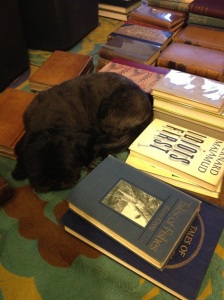 If Marlowe had a sibling, they could be bookends! (Sunday Steinkirchner photo) 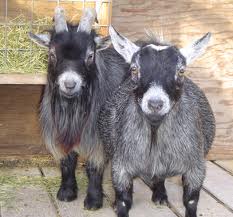 By the way, dear CE, I do have a birthday coming up and these two wearing bows are probably cheaper than jewelry:-) (image from worldbook.com)