Just back from five fun days in Vegas. The trip was originally planned around Uncle Delbert but he got a better offer and understandably chose Heaven over Las Vegas.

So the rest of our group re-grouped after Delbert left us in December, and we all decided to forge ahead with the Vegas trip in his memory. Which is why, among the Adult Entertainment Industry convention attendees and the Shooting and Hunting convention aficionados, our odd little group of family members strolled the Strip.

Under the Chihuly glass at the Bellagio, l. to r.; Jean, Gail Mark, Phyllis and the CE

Did we gamble?
Not much.

Did we drink?
Not enough.

What did we do?
I’ve been wondering that myself.

Well, there were a few restaurants. I swerved into the wrong lane and made a reservation at the excellent but WAY TOO EXPENSIVE Estiatorio Milos at the Cosmopolitan Hotel. And then Mark leaned left when he should have leaned right, and volunteered to pick up the tab before checking out the $54 a pound price tag on the fish everyone ordered. Oops. Sorry, Mark. The CE and I recently had a very reasonably-priced meal at the sister restaurant in NYC but in Las Vegas, the fish apparently bite back. Ouch! The CE will never stop talking about the plate of grilled vegetables that cost $27.

Fresh fish at Estiatorio Milos: we could have flown to Greece for what this meal cost us.

There were other and more reasonable dinners. We ate at the reliable Todd English Olives and had a night out at everyone’s favorite, Mon Ami Gabi where I sampled a wonderful sparkling wine apertif they offer there. Called a St. Germain, it features the elderflower liqueur by the same name that tastes the way you might imagine violets would if they were crushed.

This image is from lachattegitane.blogspot.com where you will find a recipe that may approximate the deliciousness of the St. Germain cocktail served at Mon Ami Gabi

And at the beginning of each dinner, there was a toast to Uncle Delbert and all the fun we had with him on past Vegas visits. We missed him in all his cranky good-heartedness and we missed Juanita, his caregiver, who was always at the ready to lend a helping hand and rein in Del with his smart remarks. But in Del’s absence, the rest of this dysfunctional family just had to carry on somehow. And so we did. Mostly by taking the sin out of Sin City, one day at a time.

The CE and Mark were left adrift one morning while all the ladies went for manicures. You may not believe where we found them because I cannot imagine two less likely characters to be betting on the ponies. It was like a scene out of a Jack Lemmon/Walter Matthau film (Google it, all you under-40 whippersnappers!)

While the cats were away…

…the mice did play. At the Sports Book. I think they actually won $20

I left Las Vegas once again without ever having placed a bet at a gaming table, but I did spin the slots: I walked up to a machine, pressed the play button once and was instantly rewarded with $40. I should have given it to Mark to help pay for that dinner…

Gail and Phyllis give it a spin. 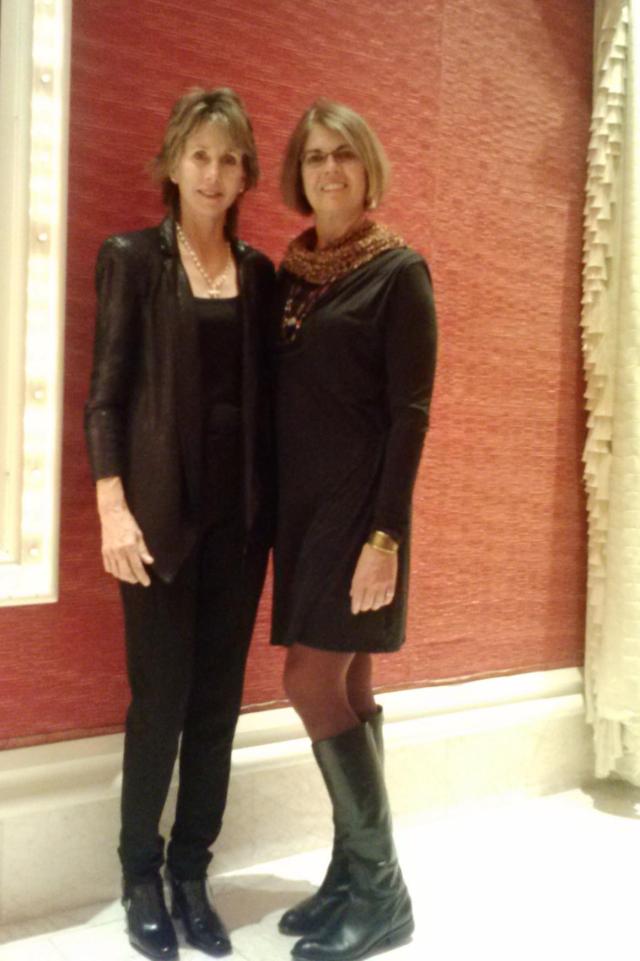 Jean and Gail get fancy! 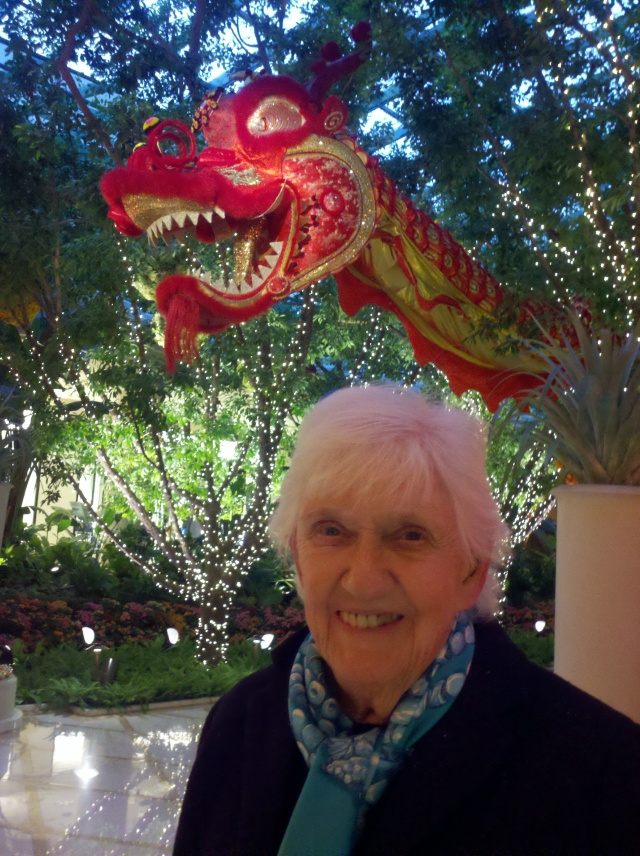 How to train a dragon: Phyllis checks out Chinese New Year decorations at The Wynn

We veered off the beaten path here and there. I wish I had taken photos of the wild cab ride the four ladies took to North Las Vegas. It probably wasn’t the best decision to seek out a daytime showing of the film Lincoln in an unfamiliar part of an unfamiliar city, but there we were, and a $35 cab fare later, we greatly enjoyed Daniel Day Lewis in the title role. I, by the way, had to actually look up the cast to convince myself that it was really James Spader (a rather portly James Spader!) playing political operative W.N. Bilbo. It was a small role, but a juicy one!

James Spader is an unexpected pleasure in the film Lincoln

The CE and I also wandered off the grid a bit. Did you know that Bauman, the esteemed rare book emporium headquartered on Madison Avenue in New York City, has an outpost in Las Vegas? Nestled somewhere between Christian Louboutin and Victoria’s Secret in the rabbit warren that is the Shoppes at The Palazzo is Bauman’s storefront, replete with gorgeous leather-bound volumes in floor-to-ceiling bookcases. We saw a nice little first edition of Edith Wharton’s Custom of the Country there that I’m hoping might find its way to our own more modest bookcase. 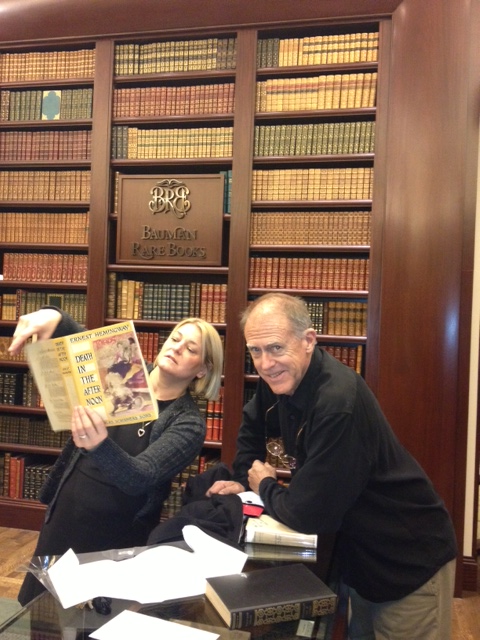 The CE checks out a Hemingway first at Bauman

I know you were hoping for a slightly more scandalous trip report, but we have our own quirky way of doing Las Vegas and we love it. Where’s the night life, you ask? Does insomnia count?

One thing never changes: my insomnia. But at least Las Vegas doesn’t sleep either!

After four days of what for all of us was a wild time, the rest of the crew checked out.

But the CE, PG and I had one last bit of fun to enjoy. Taylor’s girlfriend, Christine, happened to be in town so she joined us for our farewell dinner at Sensi in the Bellagio hotel. I’m a big fan of their Thai Coconut-Shrimp Soup and the Tandoori Butter Chicken Curry, and the CE likes their Tuna Roll. It was nice to have Christine join us for our last evening in Las Vegas. 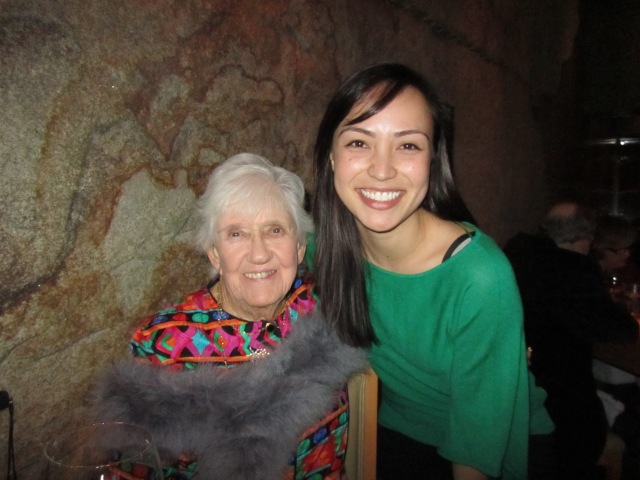