The Calm Before the Storm.

Posted on November 3, 2012 by polloplayer

We arrived home in CA late Wednesday night, counting ourselves lucky to to be on what we think was the first post-hurricane flight from JFK to LAX. We didn’t exactly leave the storm behind, as three of the four kids are there and each greatly impacted in the aftermath, but we did bring home some great memories of our visit before uninvited guest Sandy showed up.

This trip was our first with both boys living in the city. Taylor moved to mid-town Manhattan, just a few blocks away from our place, the weekend before the storm and just in time to make the acquaintance of that crane still hanging from atop the One57 building.

We also got to see Daniel’s apartment in Soho.

Jeff, the CE and Daniel: we hear that The Bookie has become quite the chef!

We enjoyed our usual culture infusion, starting out with CSC’s production of Chekhov’s Ivanov with Ethan Hawke and Joely Richardson.

We gave Ivanov an A+ for the acting but a C for the three-hour length. We saw it in previews so perhaps it will be trimmed down for its postponed opening.

A few nights later, the  London Symphony Orchestra delivered a luscious all-Brahms program at Lincoln Center and we capped off our culture fest with the profane but entertaining Broadway revival of Glengarry Glen Ross. Pacino is magic as Shelly Levene and the immensely talented Bobby Canavale was a revelation as Ricky Roma. I don’t know if this play could work without such a gifted cast, which also includes John C. McGinley as the oily Dave Moss.

Dynamic duo Bobby Canavale (have you seen him in Nurse Jackie?) and Al Pacino. We gave Glengarry Glen Ross a thumbs-up. (image from broadway.com)

Westchester County is – literally – a disaster area now, but we spent an idyllic fall day there with Angie and Jamesy before the storm hit.  Thomas was in school most of the time we were there, but he made a cameo appearance at the end of the day. If I was to design the perfect town for raising a family, it would be Bronxville. The school is at the center of the community literally and figuratively, and catty-corner from it is the most beautiful and kid-friendly library we’ve ever seen. I’d like to come back as a six-year-old just to grow up there! 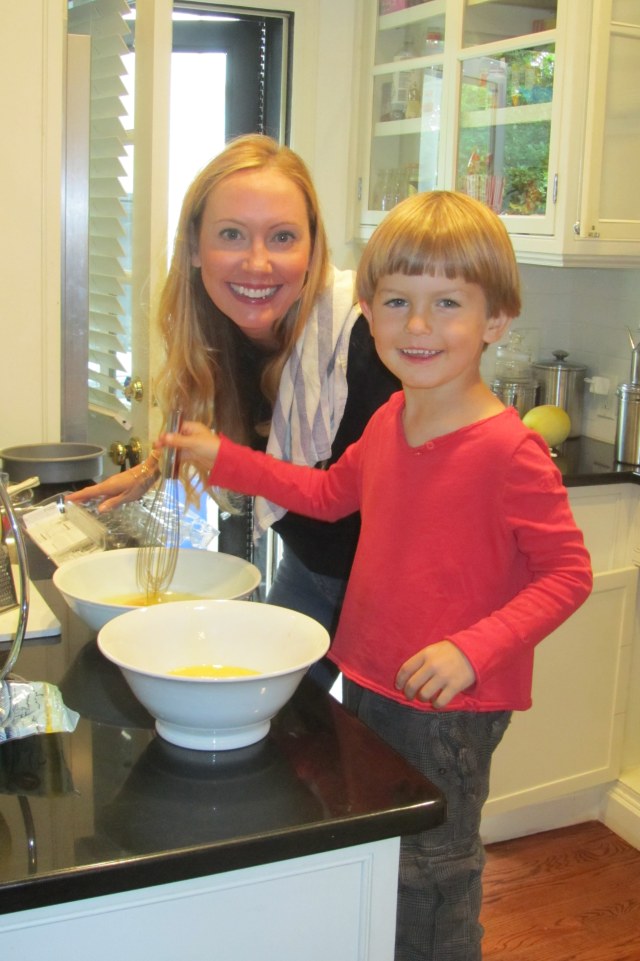 Angie and James were cooking when we arrived.

The CE walks Jamesy to his pre-school 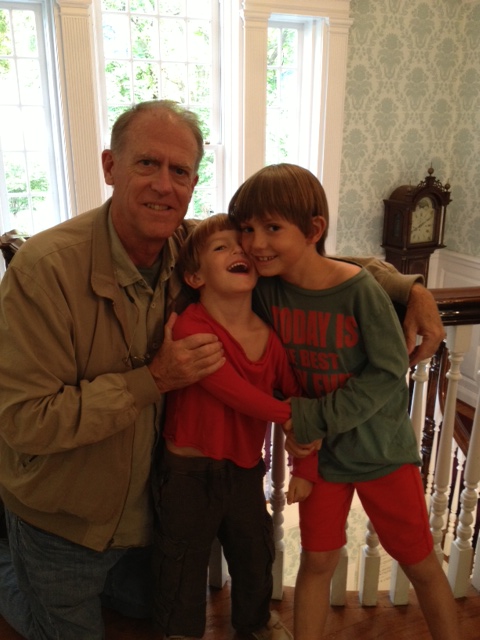 Grandpa with the boys at the Bronxville library

We took the train back from Bronxville and had dinner at the famed Grand Central Station Oyster Bar. Very fun and lots of history within those tiled, arched walls.

The CE said the Grand Central Station oysters were the best he’s ever had. 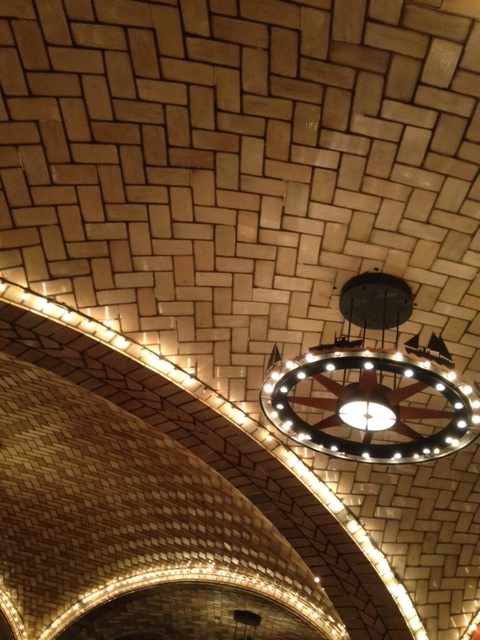 Even if you’re not hungry, it’s worth the visit just to see the restored interior. (polloplayer photo)

No trip to NYC is complete without a visit to MOMA and The Met. We stumbled upon the sky-lit Robert Lehman gallery during our visit to the Met and found it to be a treasure trove of wondrous riches. Designed as a “museum within the museum” the gallery and surrounding rooms are designed to re-create the family residence on West 54th Street where Lehman’s parents originally began acquiring works of art in 1905. My favorite take-away from the collection was this stunning sixteenth century Flemish tapestry of “The Last Supper”.

Detail from “The Last Supper”. I never knew so much emotion could be woven in thread. (polloplayer photo)

A new development in our neighborhood were a handful of camped out “Occupiers” behind our building. They seem to have focused their wrath on Goldman Sachs chief Lloyd Blankfein who lives nearby. He’s the target of my wrath, also, given how far my GS stock has dropped in the past year.  It goes without saying that once the storm clouds gathered, the occupiers grabbed their gear and headed home.

One of our favorite traditions in NYC is attending services at Redeemer Presbyterian church and this trip, Taylor and Christine came along the Sunday before the storm hit. On our walk back from the service, we stopped at several places in an attempt to buy flashlights since we knew there would be power outages. Even by Sunday, everyplace was sold out of flashlights and the drugstore and grocery lines were ominously long. We knew we were in for something, but we really had no clue what was to come. Our thoughts remain with all the New Yorkers still dealing with the aftermath of the storm. Hang in there!

Taylor and Christine were ready with their winter coats.

5 Responses to The Calm Before the Storm.