By George! A visit to Mount Vernon

Every time you take out your wallet, good old George stares you in the face, but how much do you really know about him? He could not tell a lie, he was the “father of our country” and in the dreary depths of February, harried moms secretly loathe him for that “Presidents” holiday when the kids are causing mayhem at home instead of at school.

Turns out there’s much, much more to GW, as I discovered when I picked up a copy of Ron Chernow’s much-hailed biography Washington: A Life. I expected to just dip a toe in America’s Colonial history but it ended up becoming a full immersion. Because George Washington, the man, the soldier, the general, the politician and the President, was larger than life all across the board.

The last word on GW: Ron Chernow’s biography is a stunner – highly recommended.

I passed the book along to the CE, and soon we numbered ourselves among GW’s biggest fans. In an election year, especially, George Washington’s accomplishments and character stand out. His greatest desire was to live quietly at his plantation at Mt. Vernon, Virginia, yet he sacrificially spent most of his adult life serving his country. His courage, resolve and solidarity with his troops during the Revolutionary War is the stuff of legend.

But the most singular aspect of George Washington was his wisdom and character in shaping the direction our country’s government would take after independence was won. There was a general clamor for him to become King, or at the very least, President for life. Washington’s vision and restraint played an enormous part in the creation of a government for and by the people. He said it best himself: “Republicanism is not the phantom of a deluded imagination. On the contrary,… under no form of government will laws be better supported, liberty and property better secured, or happiness be more effectually dispensed to mankind.”

As our admiration of GW grew, so did our desire to visit his beloved home at Mount Vernon. Each time we planned a visit to WDC to visit Taylor, we hoped to make the journey to Mount Vernon but the window of opportunity never opened – until this fall. With Taylor’s upcoming move, we made one last visit to WDC and found ourselves with a free afternoon on a spectacularly perfect Sunday in October – and off to Mount Vernon we went. 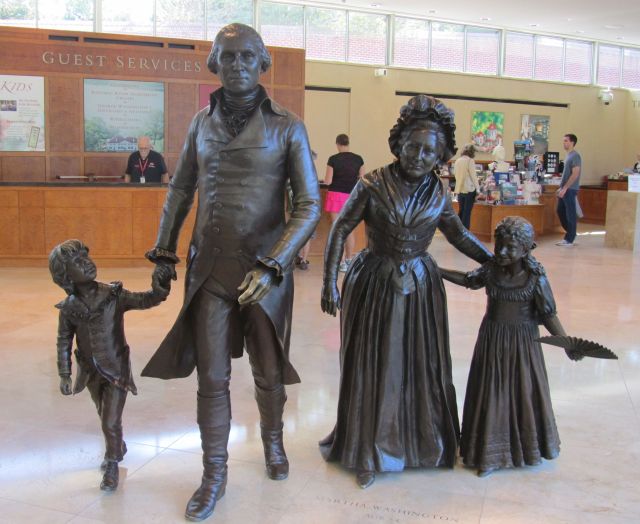 A great debt is owed to the Mount Vernon Ladies Association for rescuing the mansion, which had fallen into extreme disrepair by the mid-1800’s. They have restored and polished Washington’s estate to its original grandeur, and it was grand, indeed. 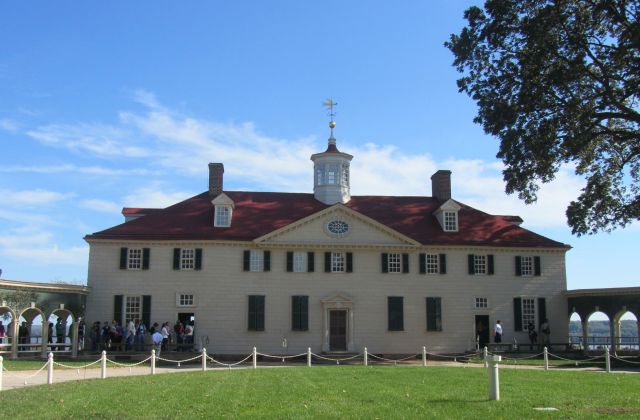 Photography is not allowed inside the mansion, but you can take an on-line virtual tour. There is no substitute, though, for actually peeking in the guest room where Lafayette often slept or seeing the dining room where Washington and his wife, Martha, entertained a constant stream of guests.

The verdigris paint in the dining room was a particular favorite of George Washington (image from gwpapers.virginia.edu)

The siting of the estate on the Potomac is, for me, the grandest thing about it. As I stood overlooking the river, I could much better understand the sacrifice Washington made year after year to endure the bitter cold winters with his troops during the war, the sweltering months in Philadelphia as the Constitutional Congress met and the years he spent as President of the fledgling United States. He had no interest in a grasp for power; he simply wanted to serve his country but longed all the while to tend to his beloved Mount Vernon.

One of the highlights of a tour of Mount Vernon is a visit with “Lady Washington”. She encourages questions from visitors and speaks knowledgeably in great depth about her life with George Washington, all the while remaining charmingly in character. 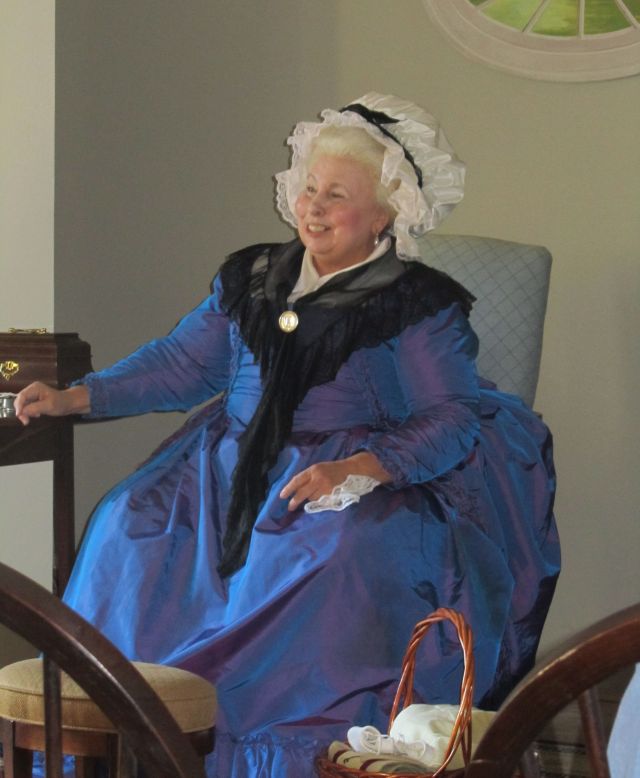 There is a lot to see at Mount Vernon – it would take several trips to fully experience George and Martha Washington’s world. There are walking tours, garden tours and river cruises on the Potomac, as well as a restored distillery and gristmill a few miles down the road. I was surprised to see that the grounds are dog-friendly, although, of course, dogs are not allowed in the mansion.

And, although I did not see them – there are chickens at Mount Vernon! We saw some sheep, but according to the Mount Vernon web site, many other “heritage breed” animals, including turkeys and chickens, are raised there, just as they were in Washington’s time.

Mount Vernon is a bit of a drive from WDC but absolutely worth the visit, both in terms of the historical significance and simply as a beautiful place to spend the day. It was uncrowded on the day we were there – fall might be the perfect time to go.

On Election Day, I’ll be thinking: “What would George do?”

“Government is not reason, it is not eloquence – it is force. Like fire, it is a dangerous servant and fearful master.” – George Washington

11 Responses to By George! A visit to Mount Vernon