We went for the history but left with hips. Bigger ones. Who knew that Philadelphia was for foodies?

Philly skyline from the freeway. It doesn’t look fattening from here, does it?

We stayed at the Rittenhouse Hotel, located, no surprise, on Rittenhouse Square.  If I lived in Philadelphia, Rittenhouse Square would be my go-to place. It is an enchanting square block of a park and everyone of every age and demographic seems to come here, day and night, to watch the world go by. 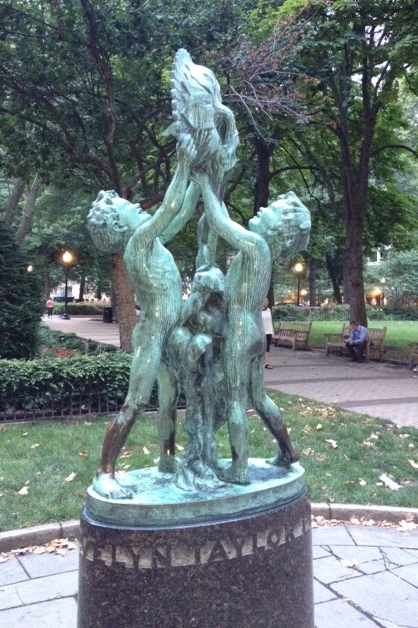 You’ll know you’re there when you see the Evelyn Taylor Price sundial.

“Who said you could be in my park?”

Our friend, John Allen, recommended a place for dinner that was close by our hotel, so after we unpacked, off we went to Butcher and Singer. It seemed unassuming enough from the street, but when we walked inside – wow! An atrium ceiling and massive chandeliers let you know that you’re not in any ordinary steakhouse.  We were so bedazzled by the interior that we just sat back to enjoy and let our charming waiter order for us. Uh-oh. That might have been a mistake. 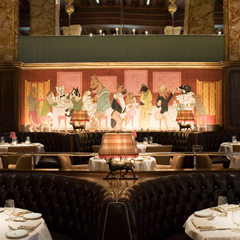 I especially liked the mural over the bar at Butcher & Singer. (image from executivetravelmagazine.com)

Hash browns are one of the house specialities. I arched an eyebrow at that suggestion, but the waiter said, “Trust me. You want these.” Turns out they are “stuffed” with all manner of deliciously evil accompaniments and are most definitely to be shared.

Then there was the steak. And the salads. And, oh dear, the Baked Alaska. Hey, not our fault – the waiter made us do it!

We planned a lot of walking the next day in an effort to atone for these sins. Philadelphia is a great walking city. Only problem was this: the first place we walked to was Reading Terminal Market, which is basically a consortium of calories. Every travel forum I looked at said this was a “must-see” in Philadelphia. And a “must eat”. Once again we were helpless. From what I’d read, two of the top stops at the Market are DiNic’s and The Dutch Eating Place.  We couldn’t agree on which, so oh dear, oh no, we went to both. Yes, I hang my head in shame as I tell you this, but really, am I ever going to be back in Philadelphia? This was probably our only shot. 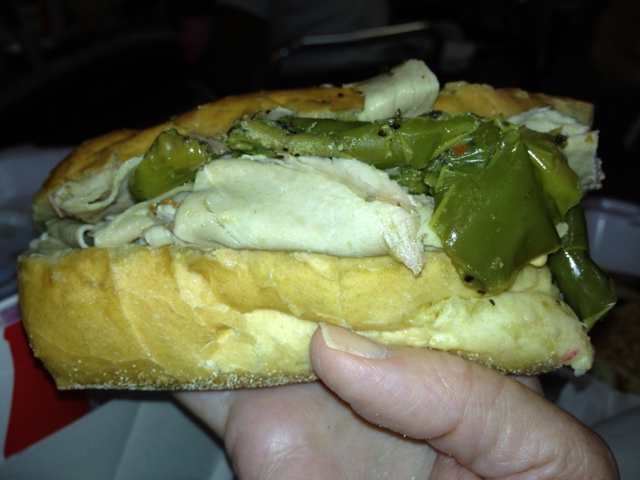 The crowds are famous, too (polloplayer photo)

The Dutch Eating Place is staffed by Amish and Mennonite women who dole out traditional breakfast fare, including scrapple, along with the most decadent apple dumplings you’ve ever tasted.

Now we know why Ben Franklin was portly – he lived in Philadelphia! And full as we were, we were eager to to explore the history of our Founding Fathers. Next post: off we waddle to Independence National Historical Park.