May in NYC: In and around the Park

When we were last here in March, the trees were still bare.  But when we awoke and opened the drapes our first morning here this trip,  we were greeted by the lush, green canopy that is the spring/summer fashion in Central Park.

We were also greeted by the progress on the building across the way that towers over Central Park South. Well on its way toward its ultimate (and somewhat controversial) ninety stories of luxury residential space, One57  currently sticks out like a sore red thumb. Just in case you’re interested, word is that the One57 penthouse is available for a mere $110 million! (UPDATE: as this post went to press, the penthouse had apparently sold to a mystery buyer who paid somewhere between $90 -$100 million to live on the building’s 89th and 90th floor. I wonder if we could stop by to borrow a cup of sugar…) 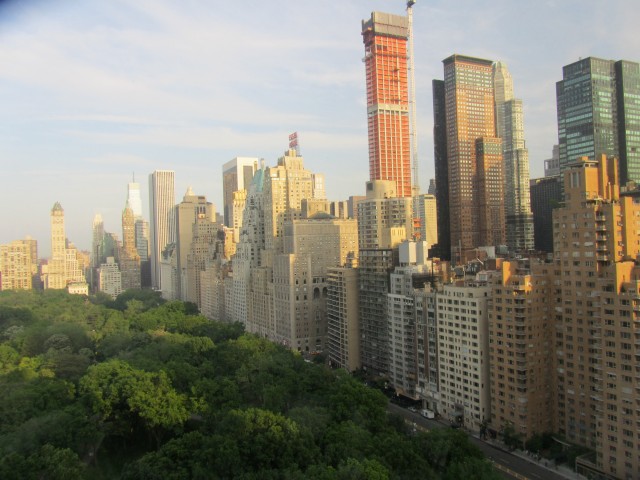 One57 rises over leafy Central Park

We had some big fun in the Park on our first day in town when we walked over to watch grandson Thomas play baseball with his team, “The Slams”. Thomas is not quite seven, but it’s probably not too soon for the Yankees to start scouting him. 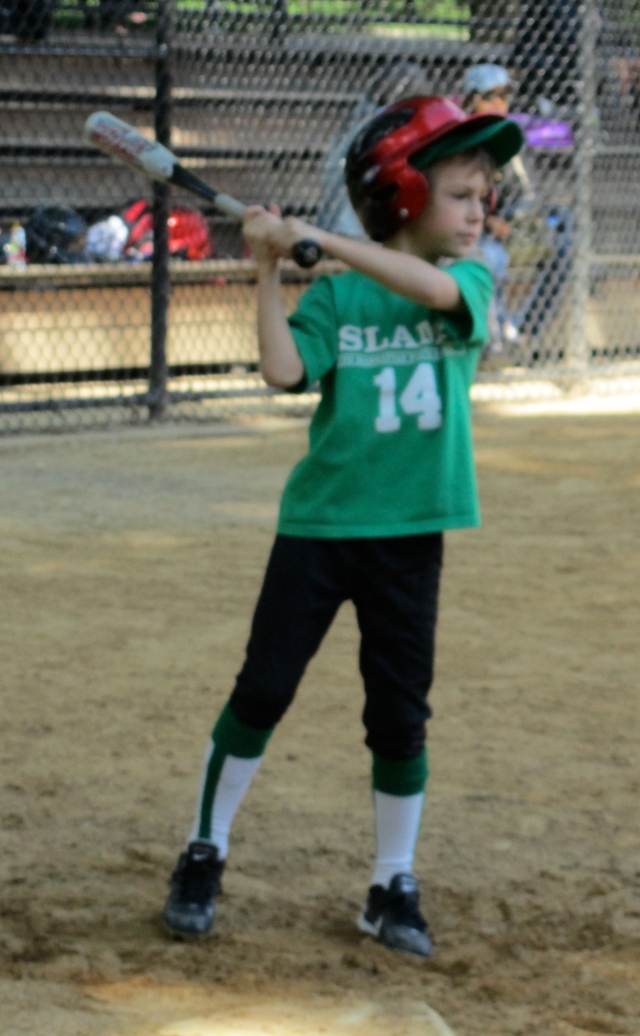 Look at that form!

Bumpkins that we are, we marveled at the luck of these kids who get to learn the game at the Central Park ball fields. No wonder Thomas says baseball is his favorite sport – if he keeps making those runs, maybe he can buy that penthouse at One57!

Jamesy in the ball field bleachers: already a ladies’ man at age four. 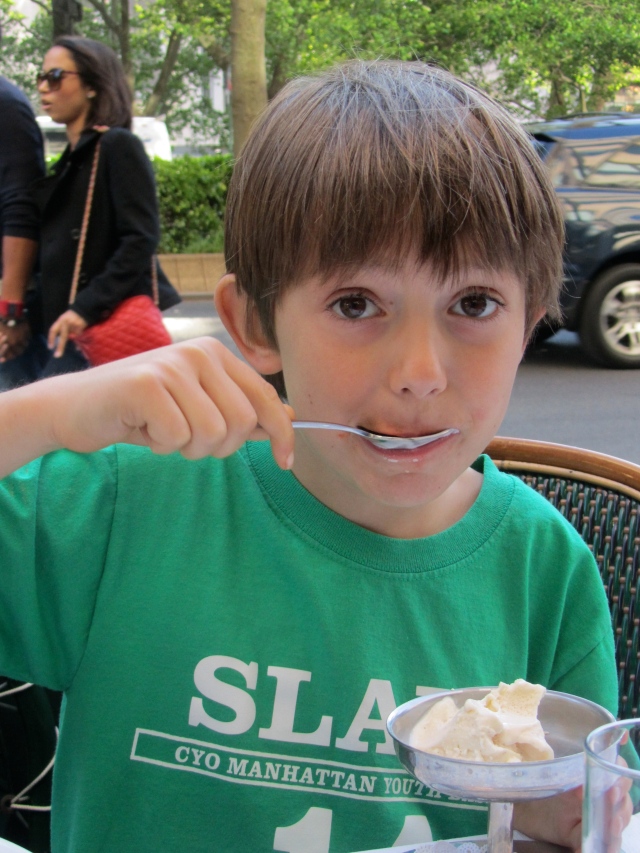 Celebrating the big win with a big bowl of vanilla ice cream.

A few days later, we celebrated Mothers Day with brunch at a restaurant overlooking the Park. It was a spectacularly beautiful day in NYC! We missed having Tina’s family and Taylor there to join us, but both sent gorgeous flowers – our apartment is like a garden this week! 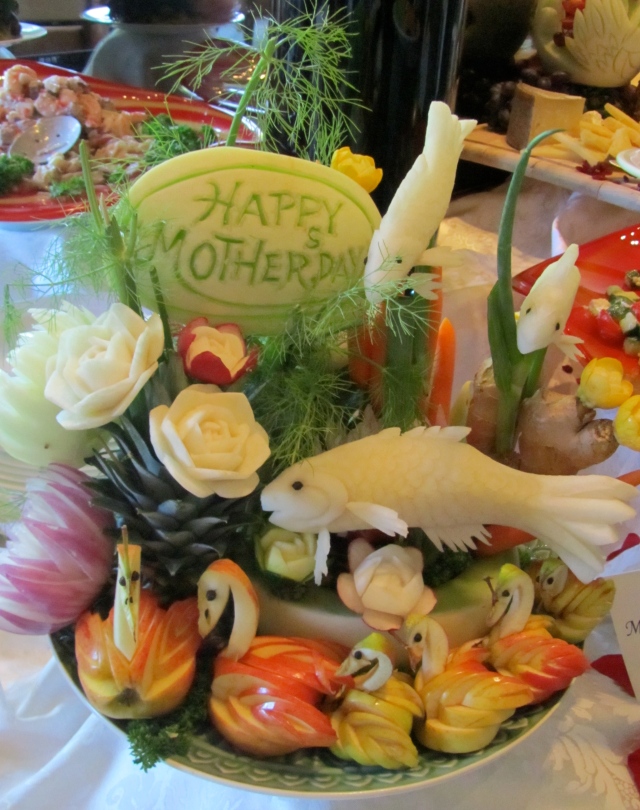 Brunch sculpture – not sure what they used for the fish – jicama maybe?

After brunch we took a walk in the Park – along with what appeared to be most everyone else in the city. New Yorkers know how to enjoy good weather! 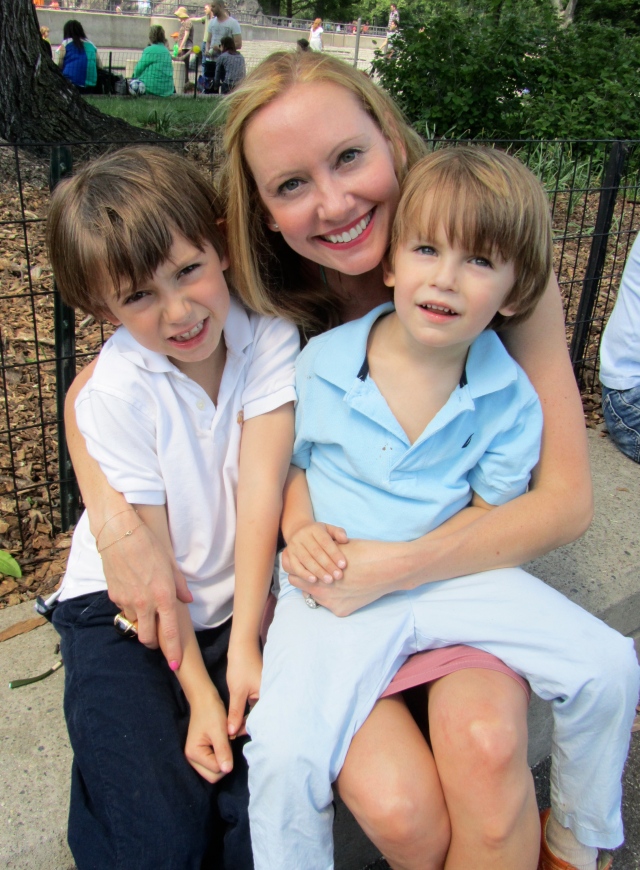 Angie and her boys on Mothers Day

As always, loving our time in the city. Many thanks to Lori and family for holding down the fort back in CA!

3 Responses to May in NYC: In and around the Park