Egg-citement on the home front!

Posted on November 6, 2011 by polloplayer

The little chickens are all grown up: Coco laid her first egg today!

My first clue that she might be close to laying was the “squat”. A mature hen will squat down when you approach, most likely ingrained behavior that demonstrates readiness to mate. I was a bit surprised to see Coco do this, as she is just  barely five months old – I expected it would be at least a few more weeks before we saw this behavior.

Note that Coco, on the left, is in a squatting position as I approach. Luna, on the right, is not squatting, she just prefers to recline. And Tulip is looking for treats!

Then I noticed Coco flying up to the nesting area and poking around there – this left no doubt that she was close to laying. I put oyster shell back on the menu – I had stored it away since it’s a source of calcium for strong egg shells and not advisable for immature birds. I also switched the feed from grower to layer crumble. The higher protein content in grower feed is important for developing chicks, while laying hens need the calicum found in layer crumble. 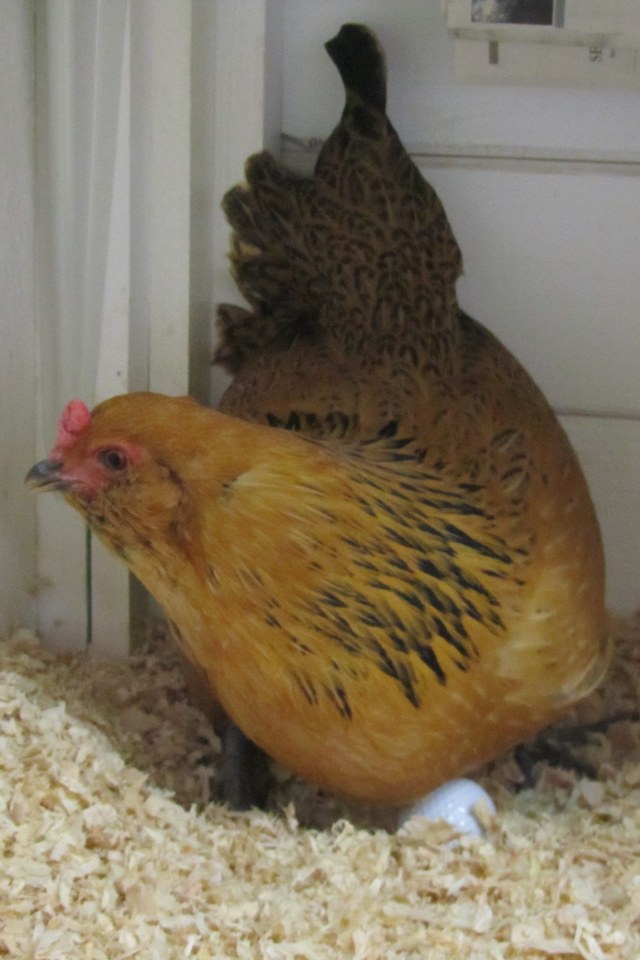 She's been exploring the nesting area for the last few days so I put another golf ball up there to mark the spot for her.

"It's about time someone else earned their keep around here!"

This afternoon I went out to the coop to check on the ladies and found a sweet little green egg in the nest. Coco, like Autumn, is an “Easter Egger” hen, meaning, because they are hatchery rather than breeder stock that they are a “mutt” version of the Ameraucana or Aracauna breed. (An excellent explanation of the difference between the breeds can be found here: http://apa-abayouthpoultryclub.org/Edu_Material/Easter%20Eggers%20vs.pdf)

Easter Eggers, or “EE’s” as they are commonly referred to, can lay anything from a pale pink egg to one that is green, blue, turquoise or even olive in color. Coco’s egg is exactly the same mint-green color as Autumn’s were.  We’re so pleased that she is now contributing to the breakfast table!

Don't count on many eggs from Luna: Silkies are known to be poor layers and are likely to prefer going broody instead.

7 Responses to Egg-citement on the home front!