Another lesson in not being in charge. Hope has proven beyond the shadow of a doubt that she knows what she’s doing and that the humans can kindly get out of her face.

Other than shifting a few inches here and there to accommodate the chicks, Hope patiently stayed planted in her nesting spot from the moment we slipped the chicks beneath her Thursday morning.  By yesterday afternoon, the little ones were boldly scooting around, pecking at everything they could find. The Silkie chick even spied a large-ish spider and promptly gobbled it up. I immediately appealed to the chicken experts on backyardchickens.com, worried that this deviation from baby food – chick starter, as they call it – could harm her.

I did toss a few handfuls of playground sand from the pen in the vicinity of the chicks to help their digestion. Remember, chickens do not have stomachs, so they need grit to grind up the food that is stored in their crops. Grit is not required when they eat only chick starter, but they seem to be adventurous eaters. I read that parakeet grit without calcium is an option, and that some stores carry “baby grit”, composed of crushed granite. But I didn’t have either of those things on hand, and saw a suggestion on BYC that playground sand is an acceptable alternative.

We were worried that Hope might be depleted from working so hard and not having access to her own food, so Victoria brought home some meal worms to boost Hope’s protein intake. We offered her one, which she took in her beak and then immediately gave to one of the chicks. Such a good mom!

"But no one is playing with me!"

Everything changed this morning when the CE called out “Jailbreak! Jailbreak!”.The little ones had raced en masse from the coop to the pen, ready to see the great big world out there.

It took her a few minutes, but Hope caught up with her charges and sternly let them know who’s boss. She’s protected inside the pen, but her instinct tells her that the babies are vulnerable outside the coop. 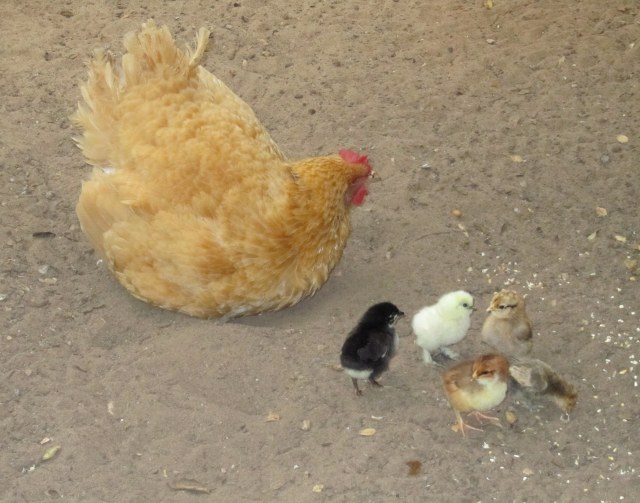 "Can you guys think of any more trouble we can get into?"

It’s a completely different script from raising chicks in a cardboard box. In that scenario, you must constantly check the heat lamp temperature; but with a broody mama, the chicks seem comfortable being in the cool outdoor temperature and then slipping back under the warm feathery tent provided by Hope when they need to rest. When Hope first went broody, I was concerned to see that she had lost most of the feathers on her breast and thought it might mean she was ill, but I learned that broody hens pluck their own feathers and create a “brood patch” in preparation for the need to keep their chicks warm against their breast. Isn’t nature amazing? 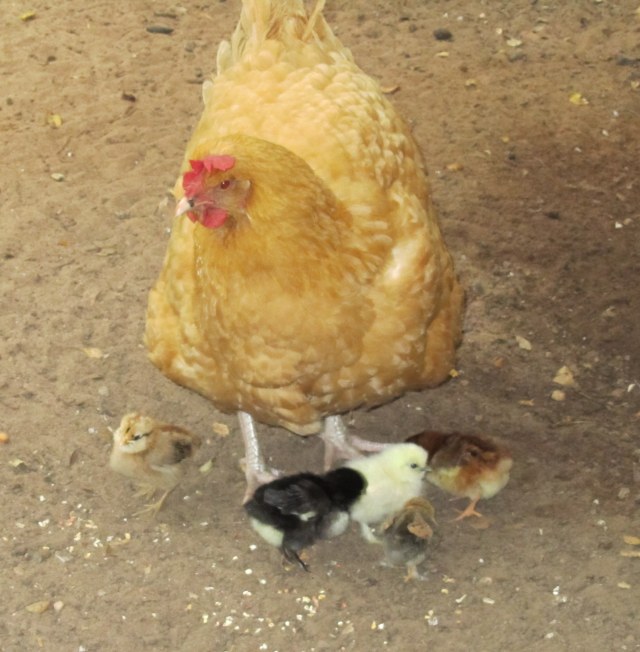 L to R, the Easter Egger, the Black Copper Marans, the Silkie, the little d'Uccle in the forefront and the Speckled Sussex

Hope ruffles her feathers up whenever someone comes near, but she hasn’t reacted aggressively when we “borrow” a chick from her. I’ve read that broody-raised chicks can be less friendly to humans than those raised in a brooder, so we want to handle the little ones as much as possible. 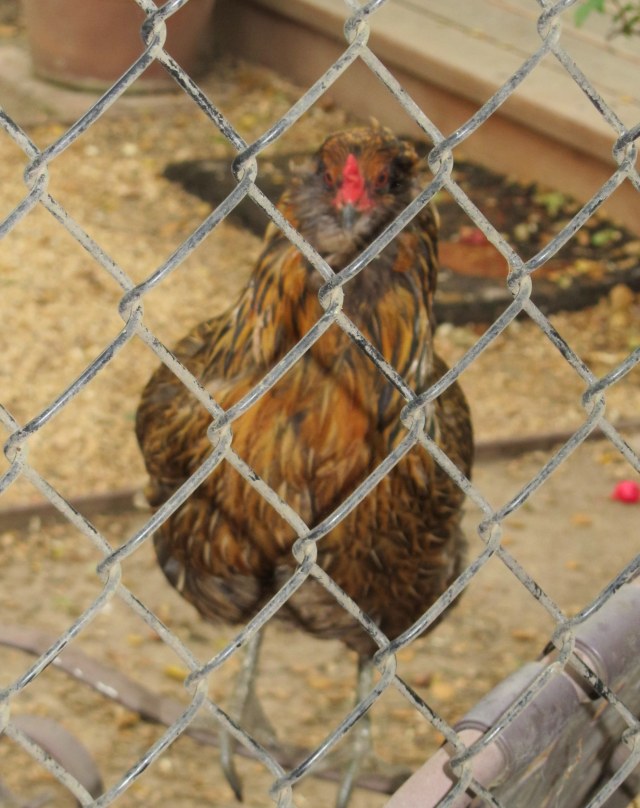 What's going on in there?"

Autumn is trying to make the best of being on the periphery but is definitely feeling a bit lonely, so we’re giving her extra treats and cuddling whenever we can. She’s been sleeping in the coop with the little family and this morning she went into the pen with them, but kept her distance.  I noticed that Hope did not behave defensively, so I expect there won’t be any problems but will monitor Autumn around the chicks until we know she has accepted them and vice versa. 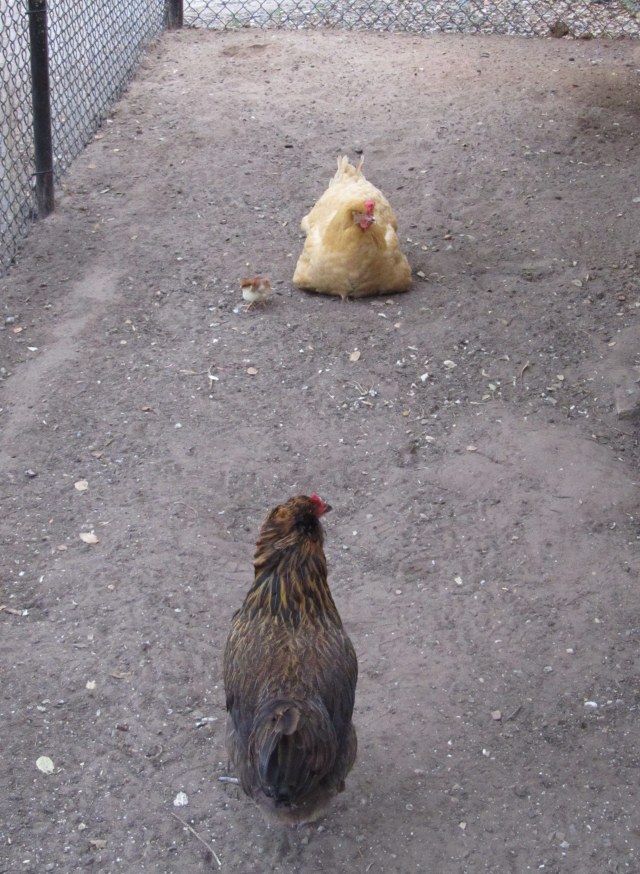 Hope is apparently in contention for Mother of the Year. When I asked on backyardchickens.com if it was okay for Hope to be feeding her treats to the babies, one responder said “You seem to have an exceptionally good broody mama.  I would expect her to give the babies the treats.  She is a good, good mama.  The chicks are lucky to have her. ” Another admonished me to “Keep that broody to raise more babies!”