Chicken Drama: a Broody, Wind Eggs, and Baby Chicks on the Way!

Bear with me and re-wind just one more time to early May. We were in NYC, and  just about to leave our apartment for a long-awaited lunch at Balthazar when the phone call came: “Hope’s not moving”.

Our hearts sunk, because this was exactly what happened to Amelia before she died.

Poor Amelia. We still don't know what caused her death.

There’s a cab driver in NYC who is probably still talking about the wacko couple who spent fifteen near-tearful minutes in his backseat talking about what might be wrong with their pet chicken.

Ashleigh and Paul were back in CA watching the animals for us, and Ashleigh was, thankfully,  taking her chicken-sitting duties quite seriously. So when Hope didn’t leave the nestbox for 24 hours, she knew something was wrong.  We dispatched her and Hope to the vet, but told her to be prepared for the worst. Our waitress at Balthazar probably thought we were discussing a beloved relative as we pondered Hope’s plight over our steak frites (God knows we couldn’t order chicken!)

She doesn't look sick, does she?

You can only imagine our relief when Ashleigh called back and said “She’s going to be fine! The vet says she’s just gone broody.”

I’ve read about broody hens and posted about broody hens (June, 2009: https://polloplayer.wordpress.com/2009/06/16/what-broody-means-in-chickenspeak/ ) but until you’ve come face to beak with a broody hen, you know not of what you speak. This is a force of nature to be reckoned with, the ultimate embodiment of biology as destiny: in short, Hope is POSSESSED!

She hasn’t laid an egg in weeks, so I don’t know what she thinks she is hatching. A plot? A plan? Certainly not any baby chicks. But don’t tell her that. 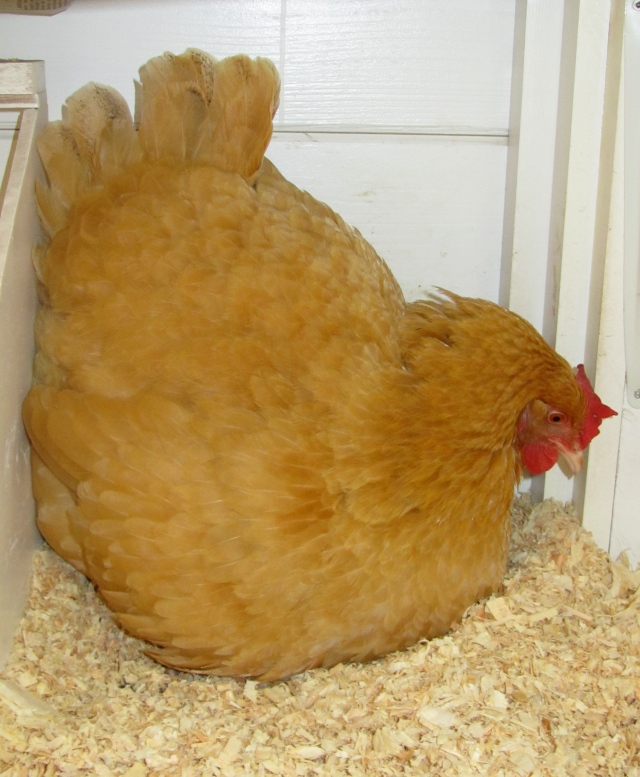 "I don't know what your problem is. I'm on the nest, where I belong."

We take her off the nest two or three times a day, lock the coop up and set her out on the lawn so she will be forced to get up, walk around and eat and drink. She does this reluctantly. For the first five or ten minutes she just sits on the grass looking dazed. Then it’s as if a switch has flipped; she gets up, cleans her feathers a bit, struts over and takes a sip from the dogs’ outside water bowl, begs for some Cheerios, and then gets that strange look in her eyes again and tries to beat it back to her nest. The other day, she was so upset at finding the coop closed that she flew up on my shoulder and refused to budge until I let her back inside to sit on her imaginary clutch of eggs. As an empty nester myself, I guess I should have more compassion, but, really, Hope, get over it!

"I've said it before and I'll say it again: that Hope is one crazy chick"

Meanwhile, Autumn has developed her own little quirk. She is laying what I’ve learned are called “wind eggs”. They are shell-less, yolk-less and look as much like a deflated balloon as anything. In fact, they don’t really look like they were worth the trouble it took to lay them. 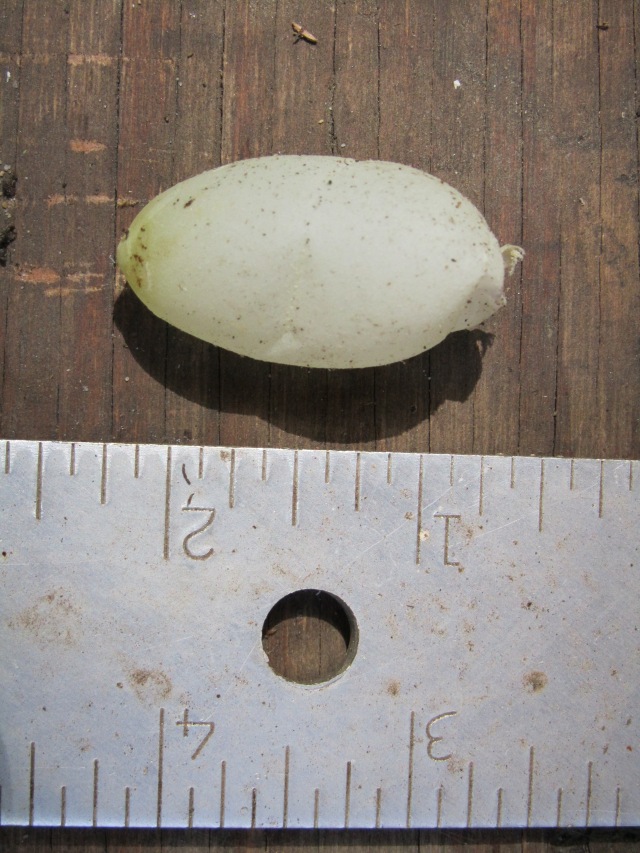 How sad is that?

The cause of wind eggs seems to be in the wind, as they say. I haven’t found anything conclusive about the topic. A site called CityGirlFarming.com  http://citygirlfarming.com/Chickens/ChickenEggProblems.html refers to these eggs as “fart eggs” and suggests that the cause could be “a small chunk of tissue comes loose in the egg production area of the hen and is mistaken as a yolk. The process immediately surrounds this hunk of tissue and creates an egg around it.”

Broad Leys Publishing, a UK site at http://www.blpbooks.co.uk/articles/egg_problems/egg_problems.php, says that wind eggs are “not important and can be ignored, unless the pullet continues to lay such eggs. Wind eggs can also occur in older hens if they are subject to sudden shock.”

Autumn is only two years old, and as far as we know the only recent shock the chickens have encountered is the sight of the newly-shaved Codester.

The upshot of all this is that there are no edible eggs being laid at the moment. Good thing baby chicks are arriving next week! Yes, we are about to set up the nursery again – four little ones are due to show up courtesy of the US Post Office either on Tuesday or Wednesday. Polloplayer readers will be the first to know!

2 Responses to Chicken Drama: a Broody, Wind Eggs, and Baby Chicks on the Way!