If it all stays in Vegas, why did I gain two pounds?

We’re just home from what has become our more-or-less annual pilgrimage to Sin City. I know, I know, the very thought of Old People in Vegas is disconcerting, but it works for us.

One thing Vegas has plenty of is hotel rooms: right around 125,000 of them. We stayed in a very nice one, a suite at The Wynn. 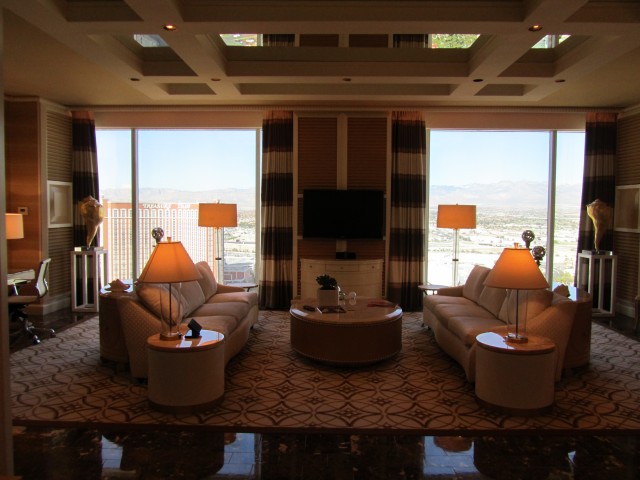 Our living room at the Wynn Tower Suites

Add to that a stack of books to read and a dance card filled with restaurant reservations and you’ve pretty much got the Geezer’s Guide to Vegas. While I read, the CE toiled away at the poker table long enough to pay for most of our lunches. Dinners were another story – he’s going to have to play a lot more poker to foot those tabs.

We started out with dinner at the Wynn’s SW Steakhouse, where you can eat on the “Lake of Dreams” terrace and be serenaded by a crooning frog. Only in Vegas… 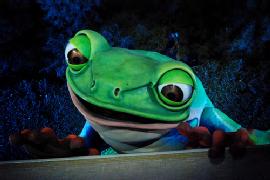 Everything in Vegas is larger-than-life, especially this animated frog.

Two standout restaurant experiences were Thomas Keller’s  (Per Se, French Laundry) B0uchon at the Venetian and Alize, the ultimate room with a view at The Palms. 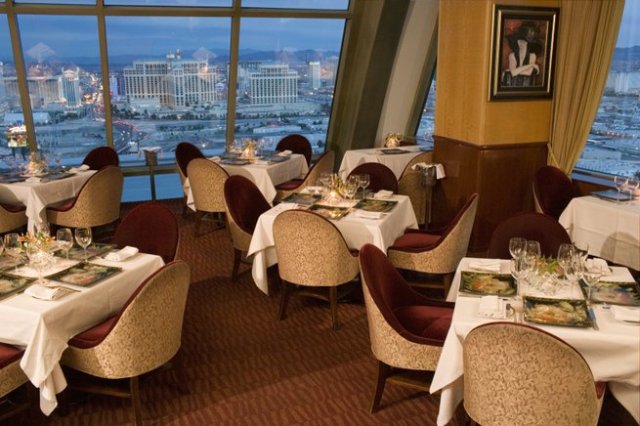 Room with a view: Alize at The Palms (photo from Las Vegas Sun)

Our favorite dining experience, however, was lunch at Tableau, where we were joined by Taylor’s friend, Dana. She happened to be visiting her family in Las Vegas while we were in town. It was so fun to see her! 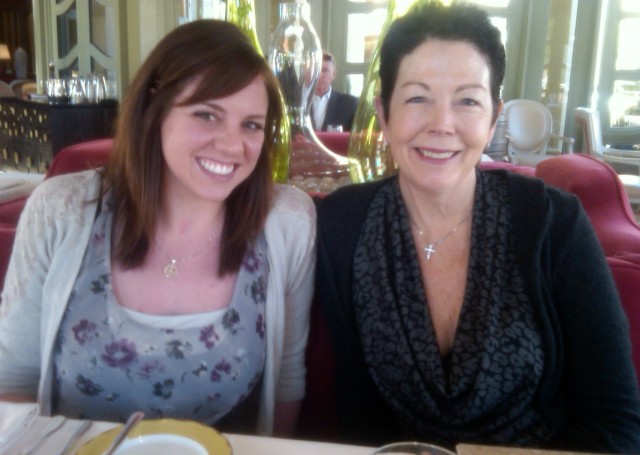 So nice to see Dana!

Lest you think all we did was eat (you would be mostly correct), I will add that we also walked. And walked and walked. On the Vegas Strip, it’s possible to walk almost a half mile just from one hotel to the next. We clocked two to three miles daily, which, of course, just made us more hungry…

When we weren't walking or eating, we rested up by the pool

On the plane ride home, I promised myself all kinds of drastic calorie cuts, only to be greeted upon our arrival by a table laden with wondrous treats prepared by Victoria and Ashleigh to welcome us home.  Homemade pizza, fresh banana muffins and a cheese platter…ah well, tomorrow is another day and another diet.

One last Vegas task remains: we certainly pumped our share of dollars into the local economy while we were there, but Las Vegas remains hard hit by the recession, leading the nation in foreclosures. All that glitz and glam is guilt-producing, so I always write a check to a Las Vegas charity after our trips there. Charity Navigator gives Habitat for Humanity Las Vegas a 4-star rating, so this year’s check goes to them.  If only there was a way to also give them some of those extra calories I consumed…

1 Response to If it all stays in Vegas, why did I gain two pounds?