It must be a global conspiracy. Someone out there has hatched (so to speak) a plan to spill every detail of our chickens’ whereabouts to every predator for miles around.

First it was the neighbor’s Australian Shepherd puppy. Cute as she can be, but I don’t believe her intentions toward the chickens were honorable.

A reasonable facimile of the cutie next door

Then it was the brace of German Shepherds that came nosing around, who apparently spread the word to a neighboring Bloodhound that arrived a few days later, no doubt having heard there was a chicken picnic being served.

We decided (with a swiftness unfortunately not rivaled by our government) that the leaks were an immediate compromise to chicken security and must be stopped. Thus, for the first time in all the years we’ve lived here, we’ve closed the entrance gates. Chickens in, everyone else out.

Everyone else, that is, except for the red-tailed hawk that came swooping down a few days later.

Hope and Autumn were having a little walkabout in the hydrangea bushes when the winged threat appeaered. I didn’t see the first pass but heard the girls shriek and as I stepped outside to see what was going on, Mr. Hawk was wheeling toward them on his second – and probably deadly – pass. He saw me and decided to lunch elsewhere, but it was a CLOSE CALL .

"I TOLD you the sky was falling!"

The CE thought our plump little hens would be no match for a hawk, but unfortunately, that’s not the case.  According to posters on the BackyardChickens web site, “A hawk may not be able to carry off a full-grown chicken, but that won’t stop them from killing and dining on the spot,” or, even more succinctly:  “If it (the chicken)  is too heavy to lift, it will just bite off the head and leave the body.”

Not a happy thought. Best defense against hawks are roosters, which according to the United Poultry Concerns web site at www.upc-online.org are “hardwired to watch for danger, alert the flock to run for cover, fight off predators protect their hens by continually scanning the sky”. Unfortunately, roosters are gallus non grata here so the girls have to take their chances.

By the way, Chloe is no hawk deterrent: she was laying ten feet away from the chickens when the hawk swooped down. I don't think she even noticed.

In the meantime, I’ve acquainted myself with the sound of a red-tailed hawk, kind of a high-pitched “kirrrrr-reeee” and I’ve curtailed the girls’ free-ranging opportunities a bit. Bottom line, however, seems to be that every creature on God’s green earth wants a chicken dinner and I will be hard-pressed to change the course of nature.

The chickens aren’t the only ones having a tough week, by the way. Soho went in for minor surgery and has to wear one of those Elizabethan collars for the next ten days. She doesn’t want anyone to see, but you know how those web leaks go… 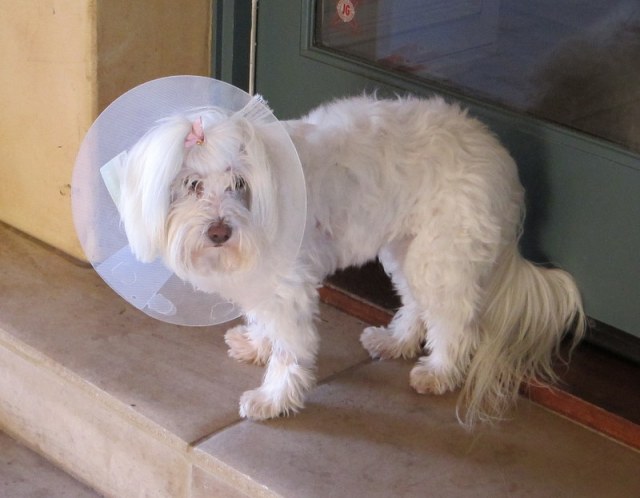 Here’s hoping yours is a safe and predator-free weekend!

Our friend, Dan, was featured in the local newspaper recently with the lead-in "They call him Superman"! Maybe he's riding to the rescue of our chickens?