Who let the dogs out?

On the front end of what is forecasted to be a five-day rainstorm. The rain commenced around 2 am last night. I know this because I was awake at 2 am. And 3 am, 4 am and 5 am. All I really want for Christmas is some sleep.

Found this on an interesting blog: http://www.fragileannie.com

And maybe a moat. Three unsolicited visits this week from neighborhood dogs, each a very near miss insofar as chickens being toast.  Victoria was coming back from a walk with Chloe and Soho when the neighbor’s new Australian Shepherd puppy bounded up and decided to pay a social call. Victoria frantically dialed my cell phone asking if the chickens were in. Which they were, by a hair. I had just closed the gate to their pen a moment earlier.

"No, as a matter of fact, I am NOT interested in getting a closer look at your deep fryer."

The puppy, clearly smelling a KFC on the premises, made  a beeline for the coop but was thwarted by the CE’s impenetrable design. Chickens safe and sound.

Until the next day, when said puppy made another run for it. Once again, the chickens just happened, by the hairs of their chinny chin chins, to be secure.

Day three the stakes were raised. Luckily, I was cleaning the coop and Hope and Autumn had just strolled over to shake me down for treats, when I glanced up from my work and saw a GINORMOUS German Shepherd, I mean, this guy was the size of your average pony, standing in the breezeway hallway, not ten feet away from me and the hens. ACCCKKK!

"Did someone mention wings?"

I clanged open the gate to the pen and shooed the girls inside, which was easier said than done since they, being chickens and not noticing that the sky was about to fall, had their tiny minds on treats and their m.o. is that they don’t go in the pen until the sunflower seeds are thrown. I know you will all forgive me for the tiny kick I gave Autumn on her tail feathers  – desperate times call for desperate measures, right?

Of course, then I was still standing there alone, facing down the biggest dog with the biggest teeth I believe I have ever seen. Being of sound mind, I skeedaddled. Only to come around the side of the house and see Giant German Shepherd #2 standing in my path! Truth be told, neither dog seemed all that interested in me, as they were both clearly sniffing out identity of the Colonel’s eleven herbs and spices  for that chicken dinner they were hoping to enjoy.

The dogs eventually departed, and while the CE continues to nix the moat idea, he did call someone to come out and get our entry gate working. 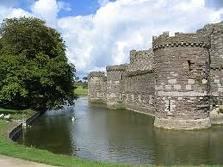 Of course, now that the gate is closed, the chickens won’t deign to come out of the coop in the rain, contrary creatures that they are. Little do they know that on any given day, they’re just a step away from being  McNuggets…

And a very merry chicken Christmas to you, too! (Thanks to Katherine for the best chicken-themed gift ever!)

Empty nester searching for meaning of life through the occasional chicken epiphany.
View all posts by polloplayer →
This entry was posted in All Things Poultry, Annoyances of Life and tagged chicken-themed gifts, Chickens, close call, insomnia, near miss. Bookmark the permalink.

4 Responses to Who let the dogs out?