We get by with a little help from our friends.

Posted on July 24, 2010 by polloplayer
Thanks to everyone for calls, notes, visits and emails in support of the CE. Looks like Gregory House has some competition from this quarter, as my poor fellow perfects his limp, sans the Vicodin and hint of a British accent.

Almost as cute as the CE

Another view of the posterior tibialis tendon

Here’s the scoop: the MRI confirmed that the posterior tibialis tendon is completely severed. The first doc who looked at it feared that it might not even be operable, but a visit to one of the known rock stars of the ankle surgery world later in the week in Los Angeles brought better news. The CE’s running career is, sadly, at an end, but he should ultimately be able to walk as far as he wants without pain. As you can imagine, Chloe and Soho were happy to hear this. 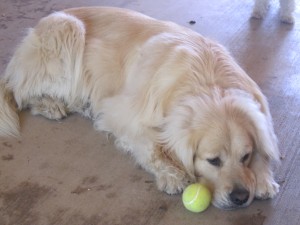 Life is sad when the CE can't take me for a walk.

The immediate problem is this: I can’t walk the dogs because the slightest tug on a leash rotates my lumbar vertebrae. The CE now can’t walk the dogs because, well, because he basically can’t walk.  In the scheme of things, that may not seem like a tragedy, but you may be forgetting how pampered and spoiled Soho and Chloe are. Thankfully, some of dog’s best friends leaped into action and volunteered to stop by and take the girls for a walk.

"Walk with me...I'll even carry my own leash"

And, lest we forget, this is a difficult time for the Shoo Bear as well - he's not sure where the next can is coming from

Alexandra has taken on the lion’s share of the work, tuckering the girls out with early morning jogs. Bernadette stopped by to cheer everyone up on Wednesday, and Julia and Grant were here on Thursday. Having Daniel home to visit for the week has lifted everyone’s spirits, as well. Life is good. 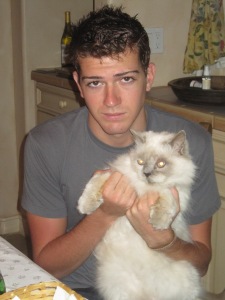 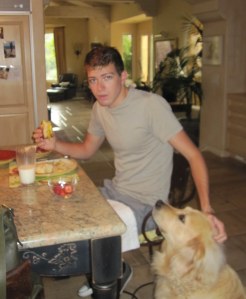 Guess where the eggs in that sandwich came from!

The CE sees another doc in LA next week and will then decide which guy he trusts most to cut him. He’s been told that the recovery for this is long, involved and no picnic, so the idea of having the procedure done before our upcoming family vacation has been nixed. It looks like surgery will be scheduled for the second or third week of September – he has been told things can’t really get any worse in the interim, so he’s free to hobble around as best he can in the meantime.  We are so blessed to have Alexandra staying with us and Victoria working for us, as the two of them are a huge help. I’m confident that we’ll sort out the rest of it. In the meantime, anyone looking to accessorize with a Golden Retriever and a Coton de Tulear is welcome to stop by and take the girls for a spin.

There will be a full cast, and there will be crutches. No idea how we will manage that with a two-story house, but we will find a way. My physical therapist is set up to do the rehab when the time comes, so that piece of the puzzle is in place. The CE is, as always, tough and resilient. Very hard for him to be benched like this, but now that he more or less has a plan, he’s determined to get through this with grace, fortitude, and chickens…

No worries about being lonely

One thing we learned is that, in all his years of executive physicals, had any doctor had ever mentioned to the CE that he had flat feet, this situation might have been averted simply by wearing orthotics. The doc he saw in LA said this injury is one of “attrition” – having flat feet puts a strain on the tendon over time which can be mitigated by wearing orthotics. If you don’t know whether you have flat feet or not, put it on your checklist to ask next time you visit a physician – apparently if you don’t ask, they don’t tell.

2 Responses to We get by with a little help from our friends.