I know, it’s not the weekend yet, but Chicken Events occur in their own time. Yesterday we had an altercation, conflagration, confrontation: sisterly love went all sibling rivalry. I heard the racket and went to investigate. Autumn was sitting pretty in the “preferred” nesting spot and Amelia had flown up and was loudly complaining. Bawk bawk BAWK bawk bawk bawk bawk!! My guess was that Autumn had exceeded the parking limit in the nest, so I reached under her and removed her egg. 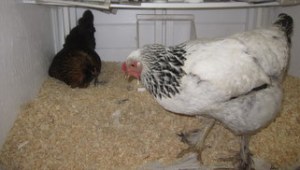 Unfazed, Autumn shifted her weight and used her beak to roll a golf ball into the spot where her egg had been. As you can imagine, Amelia called fowl, and looked at me as if to say “MOM! DO SOMETHING!” So, again,  I reached beneath Autumn and removed the golf ball. But Autumn was in a feisty mood and made it clear she wasn’t going anywhere. She just settled deeper into the nest, giving Amelia fits. 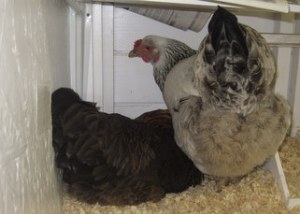 Either on principle, or because she really needed to unburden herself of an egg, Amelia wasn’t taking no for an answer. She pushed and shoved her way into the nesting spot next to Autumn.

"I have a big fluffy behind and I know how to use it!"

Twenty minutes later, both ladies were still holding their ground.

At least Hope decided to be reasonable.

Amelia finally laid her egg in that scrunched-up space and Autumn didn’t move until she was good and ready.

Autumn, the winner and champ-eeee-on!

Today, peace was apparently restored and all was forgiven.

"But if Autumn knows what's good for her, she'll watch her back..."

Empty nester searching for meaning of life through the occasional chicken epiphany.
View all posts by polloplayer →
This entry was posted in Absurdity, All Things Poultry and tagged Autumn, chicken gridlock, Chickens, Easter Egger, pecking order. Bookmark the permalink.