Well, at least I think that’s what I heard the girls say when they heard what was on the menu last night. Bernadette was joining us for dinner, so Victoria made something special: roast chicken. When I texted Bernadette to tell her not to spread the info around the chicken yard when she arrived, she texted back: “Was it a close relative?” 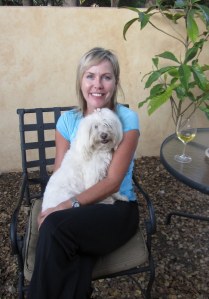 Probably not, since the chickens we buy in the supermarket are generally Cornish X’s (Cornish Cross), a bird that was developed specifically to fit the needs commercial factory-raised poultry operations. This is the chicken that nearly led to the extinction of Lily’s breed, the Delaware chicken.

A Cornish X is less a chicken than an eating machine and a freak of fast-forward photography: Due to their rapid growth, they reach a market weight of ﬁve pounds (live weight) in six to seven weeks, which makes them the most efficient and economical meat chicken on the market. 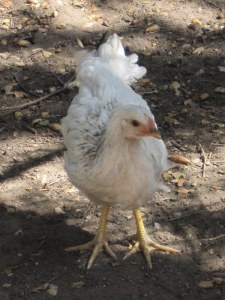 Lily at 8 weeks, which is about the age of most chicken you buy in the grocery

Of course it makess more sense from a business model to process the birds at a younger age for a myriad of reasons, but I know I’ve read someplace that an older chickens taste better than younger ones. A poster on www.backyardchickens.com explains that “older birds have higher amino acid counts wich makes the meat more complex…. more nutrient dense… and because of this you get a higher quality of flavor.” The jury will have to remain out on that one, because no matter how much my girls swear at me, I have promised not to eat them.

3 Responses to “Cluck you”