The good, the Mad and the ugly.

Ah, it was a beautiful morning. My new Keurig frother arrived, and in celebration, I made a cup of coffee topped with perfectly frothed foam in the gorgeous Raynaud cup Victoria’s mother brought me from Paris. Life is good! 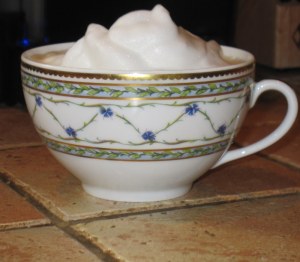 Polla Amiga and I got a cluckle out of “Mad City Chickens” last night. We were among the lucky ones who arrived early. Even so, we had to stand in a short line to get in and ten minutes later, it was SRO. The screening was postponed until they could bring in more chairs to handle the overflow crowd. A show of hands revealed that about 2/3 of those present are current chicken keepers. Presumably the other third will catch up after seeing the film. 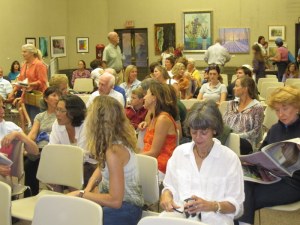 Can all these people be crazy?

As the plot summary from www.imdb.com says “Mad City Chickens weaves multiple stories and contextual issues on city chickens and their keepers in a non-linear fashion that one rarely sees in a documentary”. Most definitely non-linear! Amidst the educational and informative was a giant chicken peering King-Kong-style through skyscrapers in pursuit of a man who presumably was holding out on the wheat grass. Not a problem for us, as Polla Amiga thoughtfully bestowed some upon our girls last night. 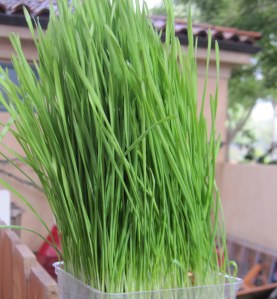 One of the things I learned from the film was that the amount of greens a chicken eats will determine the color of the yolk of the egg it lays. A healthy diet of greens = orange yolk; greens-deprived = the more commonly seen yellow yolk. A portion of the film was also dedicated to squelching the squeamishness of those who fear backyard chickens make them vulnerable to avian flu. A university expert attested that it is virtually impossible for the bug to be transmitted this way, and theorized that the real source of the disease is the heavily concentrated, confined factory chicken and egg producers. He noted that in addition to the problems inherent in high density factory farming, the lack of exposure to sunlight and the attendant vitamin D deprivation makes birds more vulnerable to disease. My chickens don’t care about any of that. They just want the wheat grass.

In case your interest in the film is not yet piqued, here is a link to a trailer on YouTube:

http://video.google.com/videosearch?hl=en&source=hp&q=mad+city+chickens&um=1&ie=UTF-8&ei=WIiVSvy0EoeQMdDxufoH&sa=X&oi=video_result_group&ct=title&resnum=5# and here is a photo of one of the main characters:

Consuelo was rescued from a landfill, where she was found de-beaked, mostly de-feathered and left for dead. Her rescuers discovered that she was one of the occasional survivors of routine gassing of second-year hens by an adjacent factory farming operation. As you will remember from the recent “Hard to Swallow” post, hens are discarded when their egg production falls off after the second laying season. Consuelo has regained her feathers and now lives with a family who feeds her a daily “bouquet of greens”. She has resumed laying eggs, perhaps as her way of thanking her rescuers.

As for ugly, Soho the Pop Tart, wins this week’s prize. I sincerely hope her groomer, Cathy, does not see this photo. 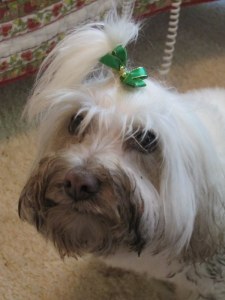 Chloe made me do it

1 Response to The good, the Mad and the ugly.